Another joyful EcoHomeLab. And more than joyful, transcendental.

This time more theoretical than ever and looking at a big scale solution, still very interesting from a household perspective: now we know a bit more about how a ZeroCarbonBritain may look like and what us as a society but as individuals can look forward. Sometimes scary, others challenging but definitely inspiring. Not often you find a positive and smiley approach. If you are bored of depressing talks about climate change and how dark the future looks like, then ZeroCarbonBritain (and CarbonCoop 😉 are for you.

Phil James (he doesn't say it but he is a Dr), from the Centre for Alternative Technology (CAT), is one of the modellers of ZeroCarbonBritain (ZCB) and co-author of ZeroCarbon: Making it happen. He came to EcoHomeLab to explain the scenario they have created where the UK would effectively be zero-emissions. People's questions and transversal debates were mixed with the presentation, making this session one to remember.

In this blog I will go through Phil's presentation but instead of just doing a transcription I will outline the story highlighting what were for me the most relevant points. If you want to know it all, follow this link, download the ZCB report and go for it. Also, paper copies can be bought from CAT's online Eco Store (as somebody pointed out: a nice place to spend your £s when you do it). I also want to say I used to work there and I like them very much.

So after all this bla bla bla….. the presentation started with a little introduction to CAT and the different reports they have made tackling UK's energy strategies. Seven so far and the first one in 1977! Then Phil told us why Zero Carbon and not just lowering emissions, the reason is simple: Climate science says that For a high certainty 85% chance of keeping global temperature rise to 2oC, emissions must drop to net zero by 2050. This is the scary bit I meant before. But good enough, that's why ZCB is here, it's a vision, it's not the way it has to be done, it is just a scenario that says it is possible if we want to, phew…

The basics of ZCB: net zero GHG emissions from all sectors (production basis); use existing technologies, no silver bullets; no nuclear, carbon capture and storage instead; and to keep it simpler no energy import.

Open question from Phil: Can we keep the lights on with 100% renewable / zero carbon / fossil fuel energy system? Answer: Let's start with where we are at now. Below are two slides showing data from 2010 regarding to total emissions and energy generated, lost and used. Remember the second one for later. 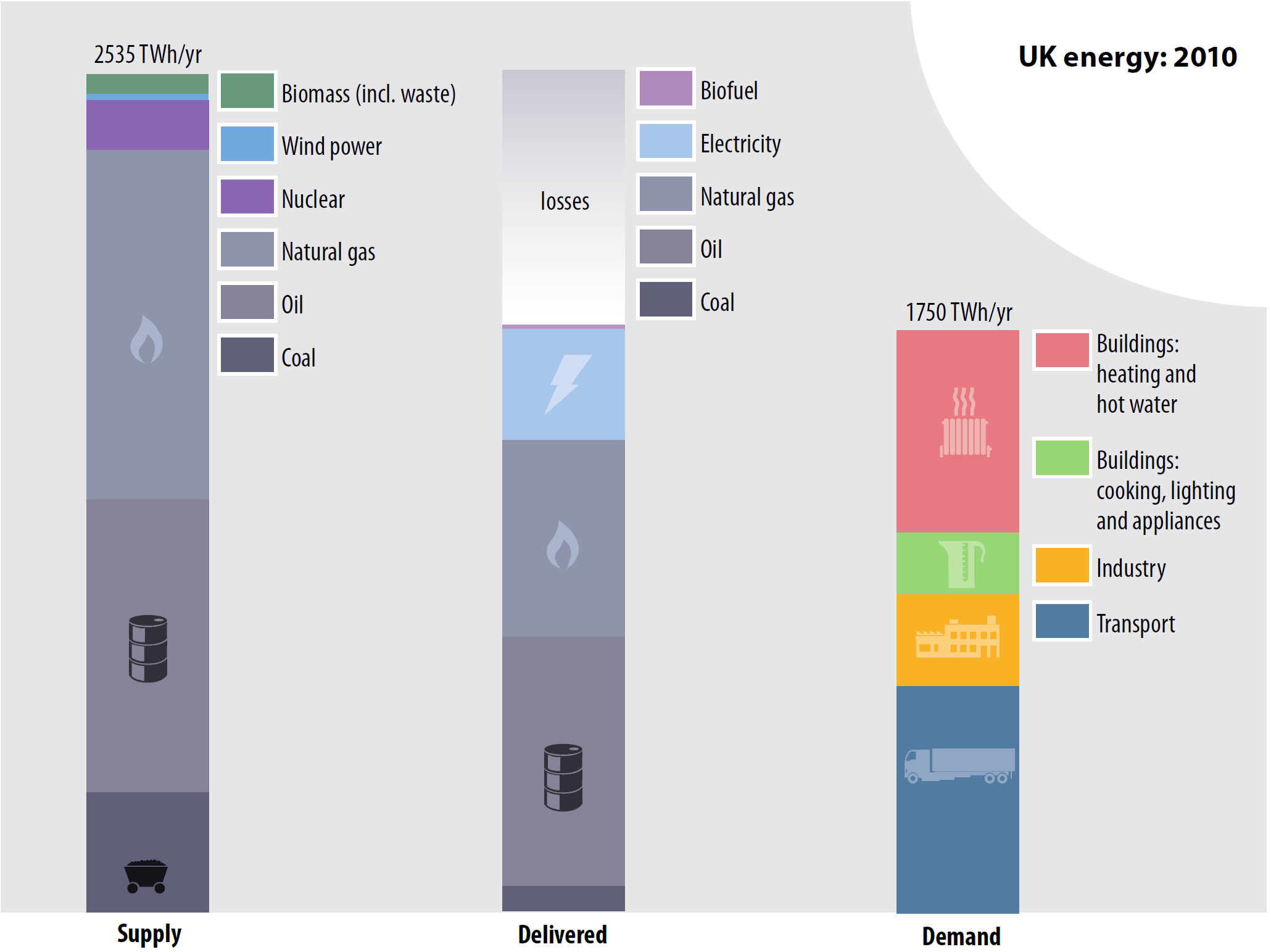 And now, back to the question: yes we can. And for that we need to decrease demand, increase renewable generation, balance supply and demand, a healthy low carbon diet and diversify land use. A lot to say, but there are numbers for that.

Next bit of the presentation was about reducing energy demand, mainly in buildings (heating and hot water) and transport but also about changing the sources that supply it. And for us, EcoHomeLabers, this is the one to look at. 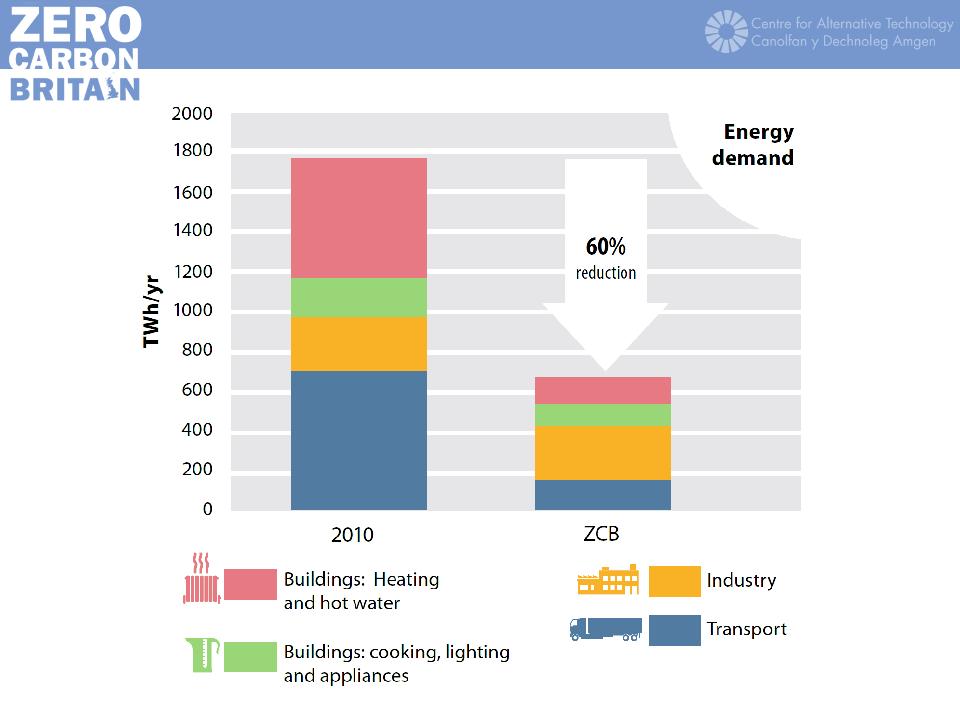 In CarbonCoop we know it and so much work goes into it: greats amounts of carbon can be saved due to heating in buildings. According to Phil these emissions can be reduced to 40% of current level if we apply the measures shown in the slide: 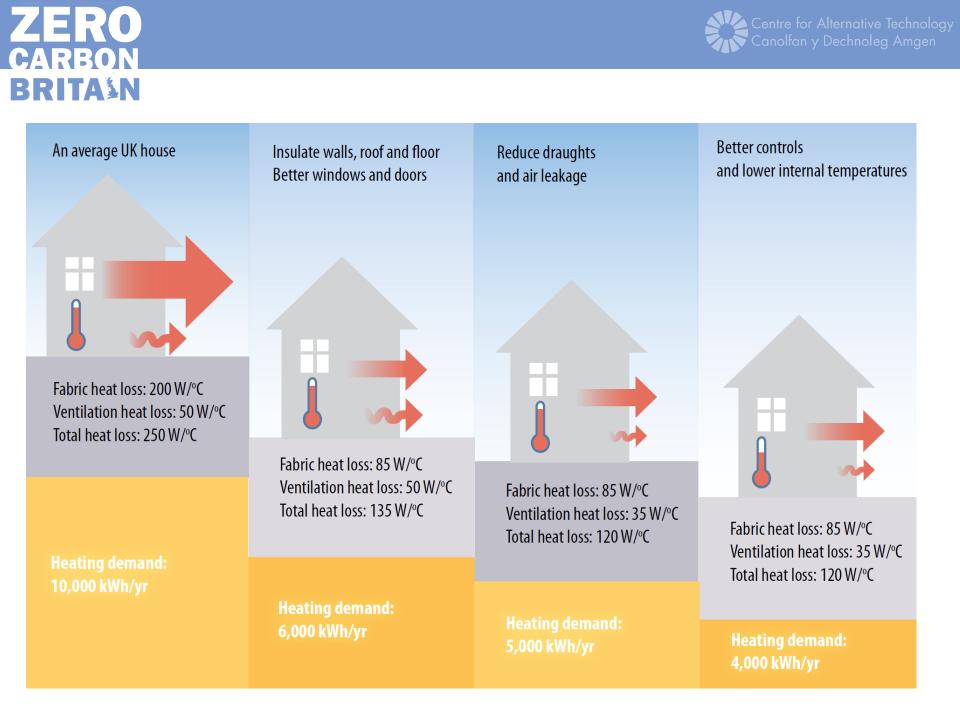 But as said before it's not enough with reducing energy demand, we also need to look at where the energy comes from. The proposal: to move from natural gas, oil and coal to ambient heat, solar thermal, geothermal heat, synthetic/biogas, less biomass (still some but it cannot be a mass solution) and increased use of electricity.

Yeahhh, my dear EcoHomeLabers, this reminds me that this is good timing to think about installing a heat pump, well you don't really need to but it is not a bad idea. I say it because we like to play and we know already about September's EcoHomeLab session…. yes building a Heat Pump Monitor to get the most of it. For those like me that are not investing in the heat pump :-(, don't worry, we'll have fun too, this monitor is a general purpose one that uploads your data via WiFi to emoncms.org, so yes Start monitoring your home!

After the publicity we carry on. All this part of the talk lived together with bits of discussion, from the ratio between energy used to make renewable systems and their total generation to the importance of using materials with low embodied energy in buildings: from local resources, hempcreet, paper, rammed earth… It was also pointed out the problem of retrofit not done properly and how monitoring can help to check post retrofit performance.

Now we went into transport, in this case the emissions go down to as little as 20% of current level. How to do that? No oil thanks. Just electricity (for cars), synthetic liquid fuel (for airplanes) and hydrogen (I can't remember for what, both?). But also the typical things: less use of airplane and car while more train, bus, cycling and walk (also known as: behavioral change, another not easy one).

Another one for you EcoHomeLabber: buy an electric car and match your charging times with your neighbor's PV installation. Or again if you, like me, are not buying an electric car 🙁 can you think about sharing one with others and monitor each ones consumption for billing purposes. I am not doing that either, just trying to be creative but again not a bad idea. Come to EcoHomeLab, you'll enjoy it and will save some CO2!!

Gosh, so many adverts in this blog!!!! As I was saying, I liked the following slide that shows how important are to reduce demand but also to improve efficiency. 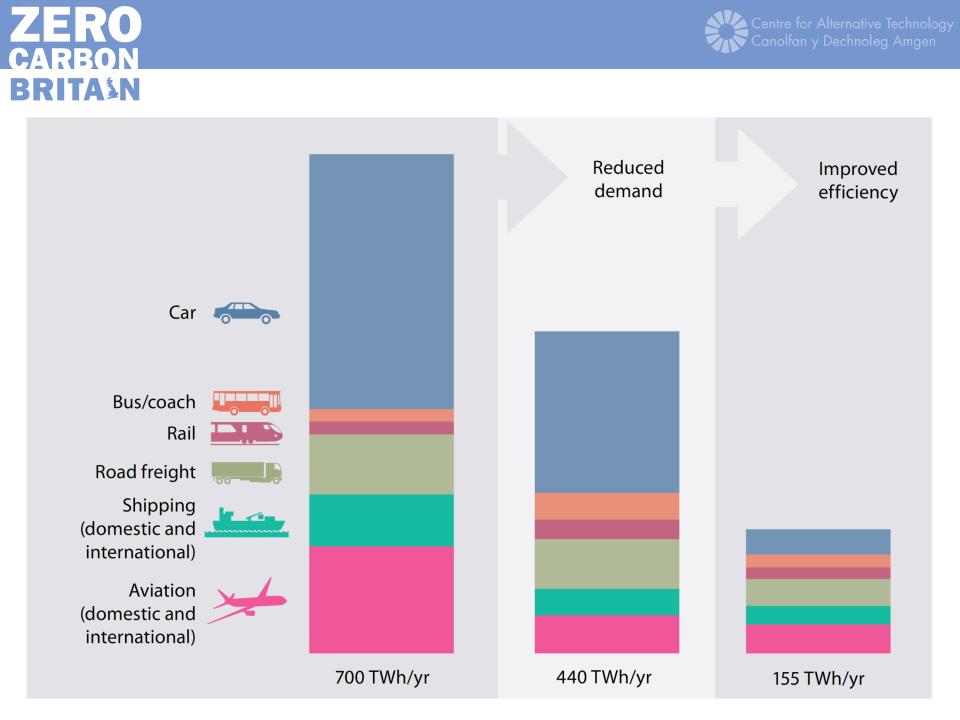 In ZCB the energy demand for the industry sector doesn't go radically down, but it radically changes how we fuel it: no coal, oil or natural gas; instead it uses synthetic/biogas, synthetic liquid fuel, biomass and more electricity. Ey, EcoHomeLabber can you think about an EcoIndustryLab? Oh, terrible joke, I'll shut up.

After all this reduction of demand, it would still require 60 power plants using a mixed of fossil fuels to generate enough supply for the demand in the ZCB scenario.

So there is less demand, good!! But also only renewable / fossil free sources. And which are those?

For electricity: offshore wind has a magnificent role providing around 70% of the total demand, the other 30% by onshore wind, wave power, tidal, PV (limited as too much PV generation could end up collapsing the electrical system), geothermal electricity and hydro.

For heating, as said before: the winner is ambient heat (heat pumps, therefore electricity – 70% of demand), biomass, solar thermal and geothermal heat.

And finally, where do all that biogas, synthetic gas and synthetic fuel come from? From biomass: waste and grasses for anaerobic digestion, Miscanthus (no idea what it is) and short rotation coppice.

Another graphic from the slide show, full of information is the one below. You can see all the sources and how the energy flows to a different end use. You know, all these colorful and beautiful illustrations (have a look at he ZCB book, there are so many) are made by a good friend of mine, John Urry, best graphic designer I have ever met. 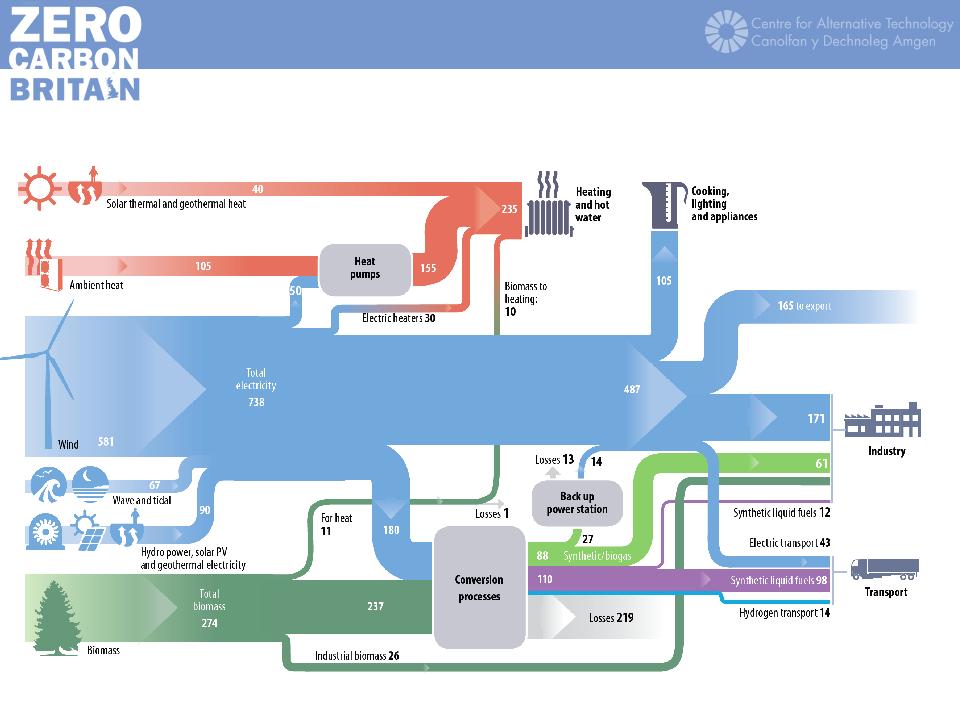 But Can we keep the lights on?

Still a good question, everything so far sounds like very good intentions but would that work?.

Electricity is crucial in ZCB because it is used for everything: heating, transport and industry. Then electricity generation is mainly wind and other renewable sources, what if it is not windy or sunny enough when my apple crumble goes into the oven?

We know that, because I come to EcoHomeLab, at some point I'll be working with an emonPi clever enough to tell me when to switch the oven on. And even more, also I'll have some ideas about how to automatically do these things because on the 11th of August Glyn Hudson (from the OpenEnergyMonitor) is coming to EcoHomeLab meetup, remember in MadLab, to tell us how live energy monitoring data from the emonPi can be used to inform home automation systems such as OpenHAB, LightWaveRF and HomeAssistant.

But what about the others?

So the ZCB energy model has been run over ten years of real hourly data to generate the following graph: 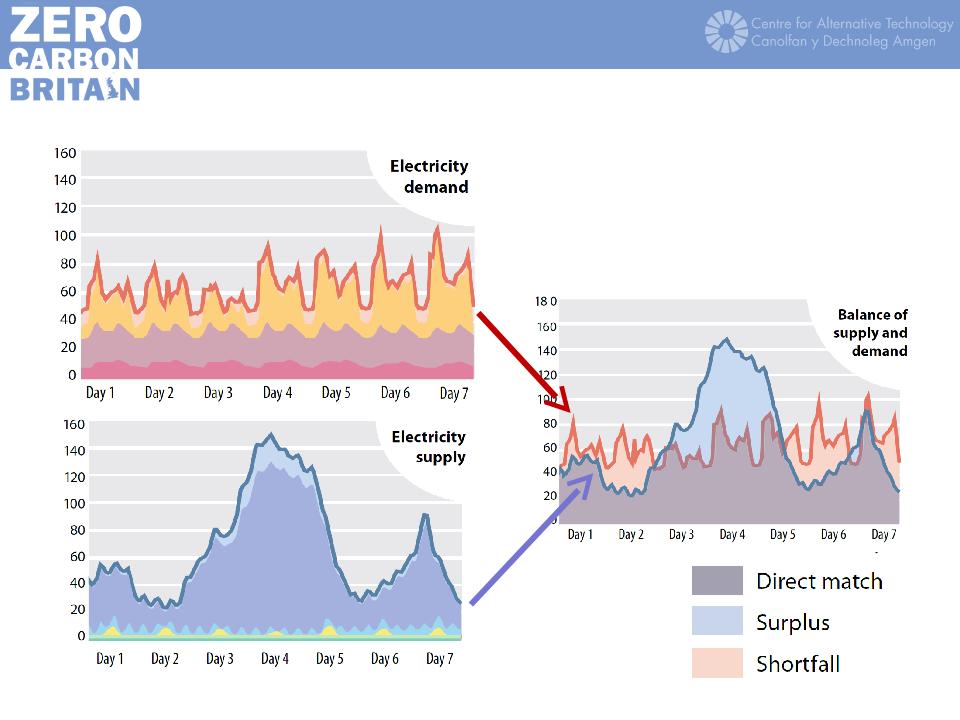 It is interesting to see that there are moments of surplus generation but also moments of shortfall. The surplus combined with biomass is used for the generation of the synthetic biogas and fuel that feed some forms of transport and industry as I mentioned before. Clever process: getting the maximum amount of fuel from the minimum amount of biomass. And there is enough of these synthetic biogas and fuel to be used on backup power stations, working effectively as a massive storage.

So ZCB has checked with data from the last ten years that even if there is not enough renewable generation at a specific moment there will still be available a back up system fuelled by non fossil fuels. Marvellous.

This is getting long, but getting to the end.

Biomass is used in ZCB directly as energy but also combined with electricity to produce synthetic gas and liquid fuel. On top of that it is used as well for capturing carbon. This requires a complete restructure of the use we do today of land. The best way to understand this transformation is another graph. See below. 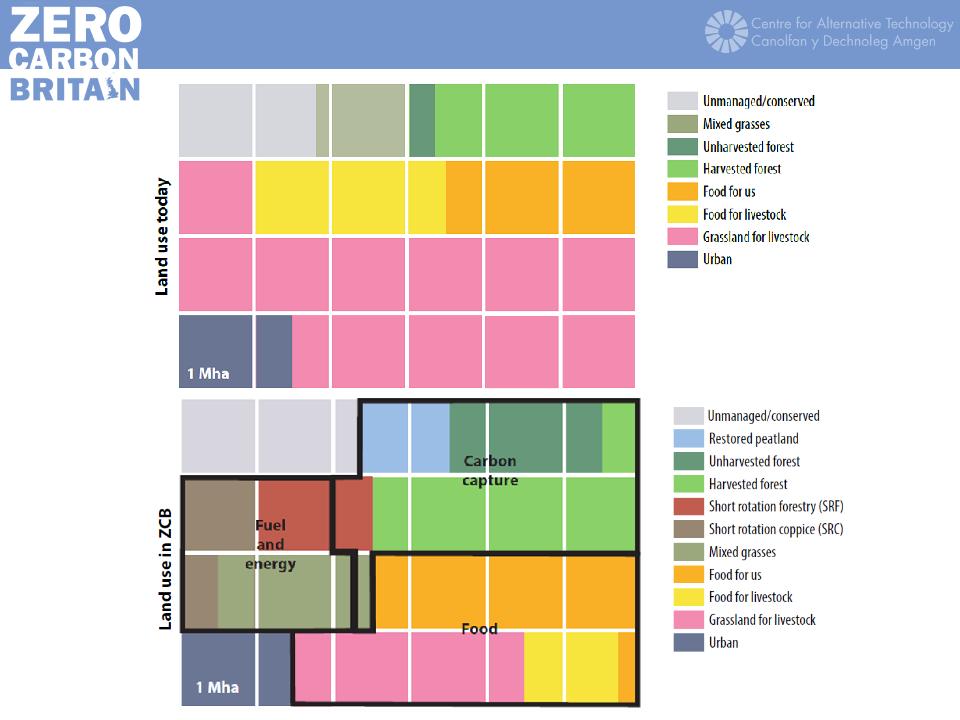 There was a question about the use of agrochemicals and their effect on emissions. Phil said  that best practices in agriculture that improve soil capture have been included in the model.

If you remember well, I told you to keep in mind that graph in the beginning about Where we are now. Here there is a better one: a net zero scenario. 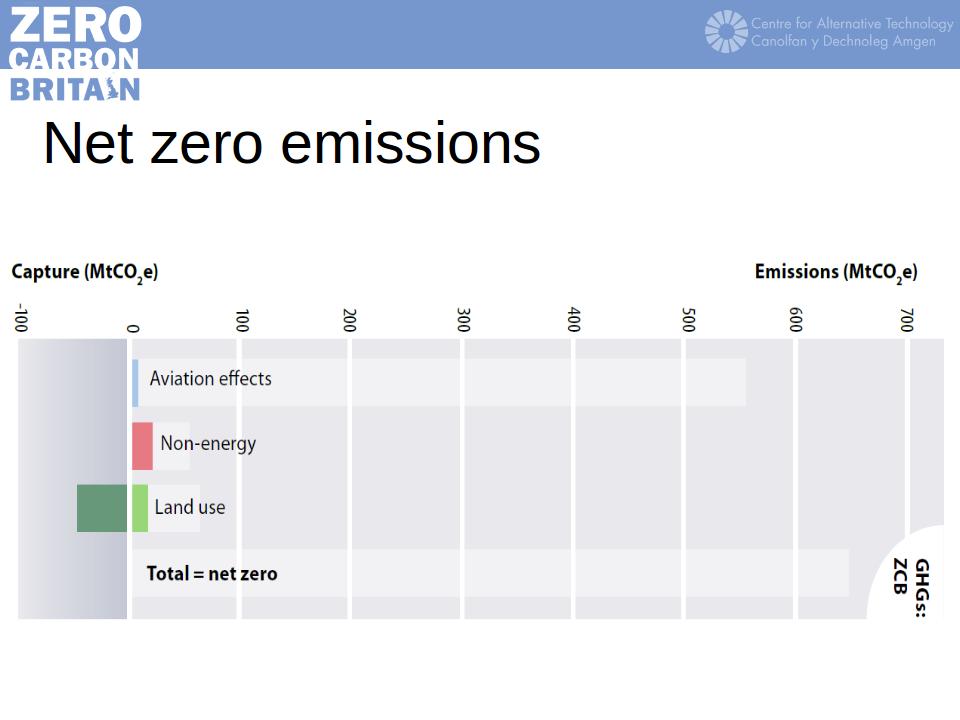 Great, the numbers look good and we believe they work. And now what? Discussion again, and it was the one that had to happen at some point. How do we make that happen? Where does the motivation come from? Who/what leads the process? Policy, market incentives, grassroots movements? Who is responsible of each part of the solution? Role of the government? These questions were the answers themselves, impossible to track the whole thing.

If you want more

Some resources that Phil gifted us with:

Almost five pages (without slides) of blog. If you have done it until here, I guess you were enjoying what you were reading.

Not a hands on EcoHomeLab or the typical subjects we cover but with plenty of information to help us think what can be done in this space. Apart of that, a brilliant meet up, great to see that people are imagining/designing how the future can look like and even if ZeroCarbonBritain scenario is not the one, it allows us to think that there is an scenario and a future!!

Big, big thanks to Phil for coming and sharing his work and knowledge – and for sending me the slide show without which I wouldn’t have been to able write the blog, I was listening to him!

By the way, we were many, I counted 18! People from/interested in robotics, instrumentation, architecture, Global Justice Now, mechanical engineering, biology, health… 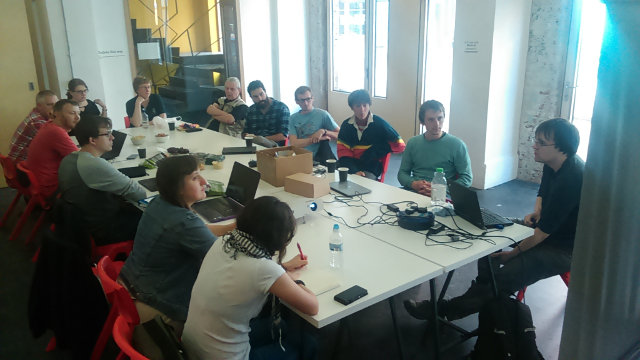 And while saying bye I add that I'll see you on August the 11th at Madlab for next EcoHomeLab with Glyn Hudson from OpenEnergyMonitor telling us from monitoring to control and intervention – an introduction to OpenHAB, NodeRED and how to control your home.