Carbon Co-op members Alan and Monica discuss how they have used a thermal imaging camera to identify, diagnose and resolve airtightness issues in their newly refurbished home.

We have nearly finished a major refurbishment of our house (see the presentation we gave to Carbon Coop on October 6th, 2017, “A Tale of Three Retrofits”). This included replacing all the windows and doors by triple glazed units supplied by the superb Green Building Store. (We didn’t do any external or internal wall insulation).

We were interested in what the thermal properties were after refurbishment, so we borrowed Carbon Coop’s infra red heat camera. We took hundreds of photos during the day and night, both inside and outside. We found a few air leaks which were easily solved with expanding foam, such as the TV aerial entry point.

We were puzzled by one set of photos. All of the windows had about a 6 degree C temperature gradient between the edge of the window (usually worst in the bottom corners) and the surrounding area. The photo below is of the upstairs toilet window in Jan 2018 showing the gradient ranging from 7.8 to 13.9 degrees C. 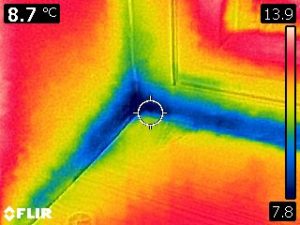 However, one window, in a small front porch loo, had a larger temperature gradient and was much colder – the gradient was 10.8 degrees, from -1.1 degrees to 9.7 degrees C. Again, see the photo below: 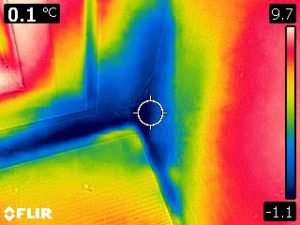 We contacted Green Building Store about this – they have fabulous after sales service. They said infra red photos are difficult to interpret without knowing a lot of background information. However, they advised that Diane Hubbard from Green Footsteps was an expert in such matters and as luck would have it, she was attending a carbon coop event the following week.

We went to the event and were able to spend a highly productive time with Diane looking at our photographs. Her advice was that:

As a result of this advice we did two things. Firstly, we sealed between the corners of the window frame and the window cill with standard expanding foam (there was a slight gap we could get the nozzle into). Secondly, we borrowed the heat camera again, raised the temperature in the room as Diane suggested, and re-took the photographs. As you can see from the photo below, the heat differential is now down to the same 6 degrees C for this window and the window is the same temperature as the others. 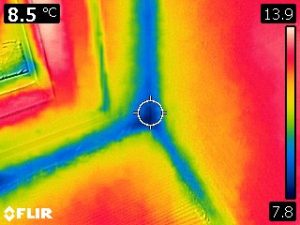 So, a combination of the Carbon Coop heat camera, and expert advice, has solved a problem of leaking heat in our house – and we didn’t need the window refitting.