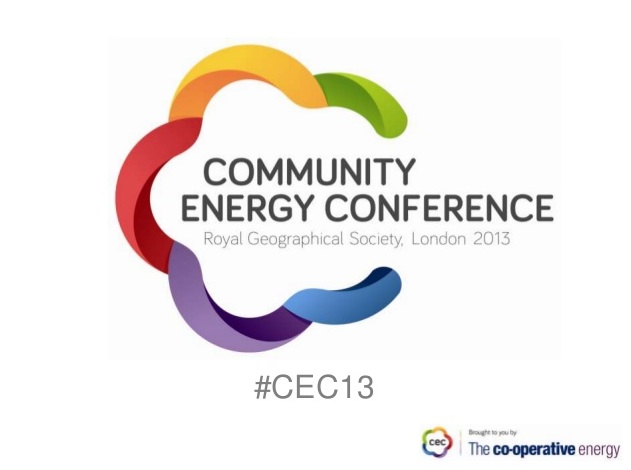 The event was organised by Co-operative Energy and focussed on small community energy schemes. The event was held at the National Geographical Society in London. As you know from your emails, Jonathan got two free tickets for the event from Pure Leapfrog, an organisation that provides pro-bono support and funding for community energy projects. I volunteered to go as I visit a friend in London regularly and was going anyway.

Jonathan sent me a stack of the little red Carbon Coop booklets to hand out to help spread the word.

I arrived a bit late, as I felt 7.15am was early enough to be getting up on a Saturday, so I missed the introductions. With the theme was community energy there were twelve speakers – all interesting, interspersed with breaks, lovely food and two workshops.

The subjects covered were – case studies of individual projects, how to get started, financing your project and political policy.

The speakers were all very knowledgeable and experienced. For example, Jon Halle from Sharenergy explained how important it was to get people that everyone knew in the community onto your project team. By displaying a large poster of the five people that qualified as well known, his wind farm project raised two thirds of their share issue in something like four days.

People had come from all over the country, from Hastings on the south coast, Bristol and several from Scotland – all very different. I started talking to one man and our discussion became a bit heated as he had had a green deal assessment and suggested that there was no way I could cut my carbon use by 80% as recommended by my Carbon Coop assessment. I am usually a bit of a mouse but found myself asking loudly how he could say that without even seeing my survey! I think he will remember the Carbon Co-op.

There were companies present such as Abundance Generation who would help market and get shareholders for your project and a civil servant from DECC (Department for Energy and Climate Change) who sounded like he was going in the right direction.

Rebecca Willis from Co-operatives UK spoke about what she wanted from the government, e.g. an easier path through planning legislation for energy generation schemes. Jim Robinson the man from DECC was writing it all down.

The conference was very well organised, Tom Hoines, head of renewables at Co-operative Energy wouldn’t let the speakers over run, so there was time for questions and breaks. As a result I was still able to concentrate and be interested at 5pm – seven and a half hours after I arrived.

At the end Tom Hoines offered to buy all the electricity that peoples projects produced. I had changed from not feeling that interested in being involved in community energy generation to planning to put a wood pellet boiler in Marple swimming pool. It really was a great event, inspiring. I would pay for my own ticket next year, it’s really worth it.