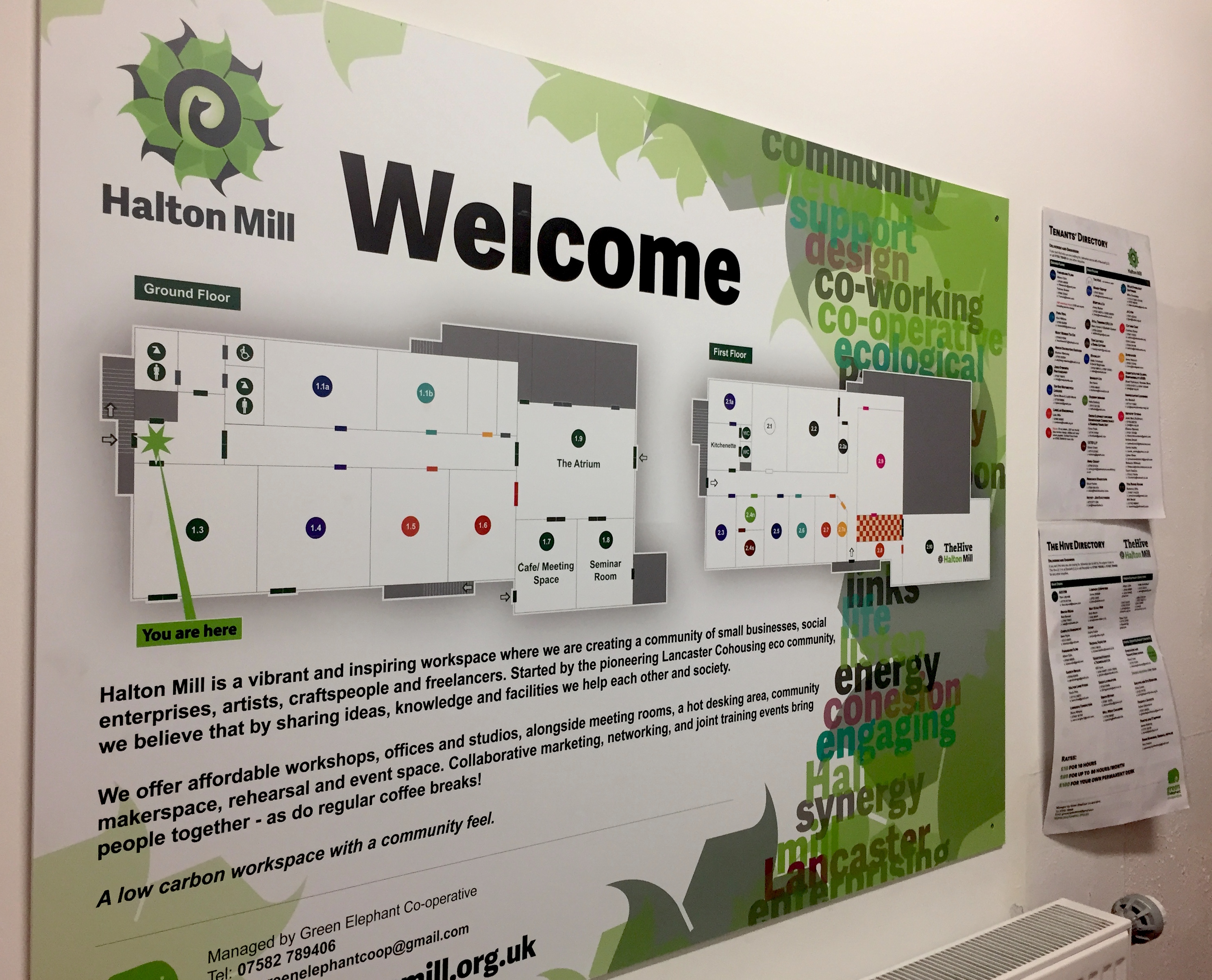 This January, Carbon Co-op have begun to install smart meter extension (SMX) devices as part of Nobel Grid beginning with Halton Mill, a business centre which forms part of the Lancaster Cohousing development.

Lancaster Co-housing is a co-operative co-housing development in Lancaster in the North West of England consisting of 60 new households built to low energy Passivhaus standards and a separately refurbished mill that houses 15 business units. 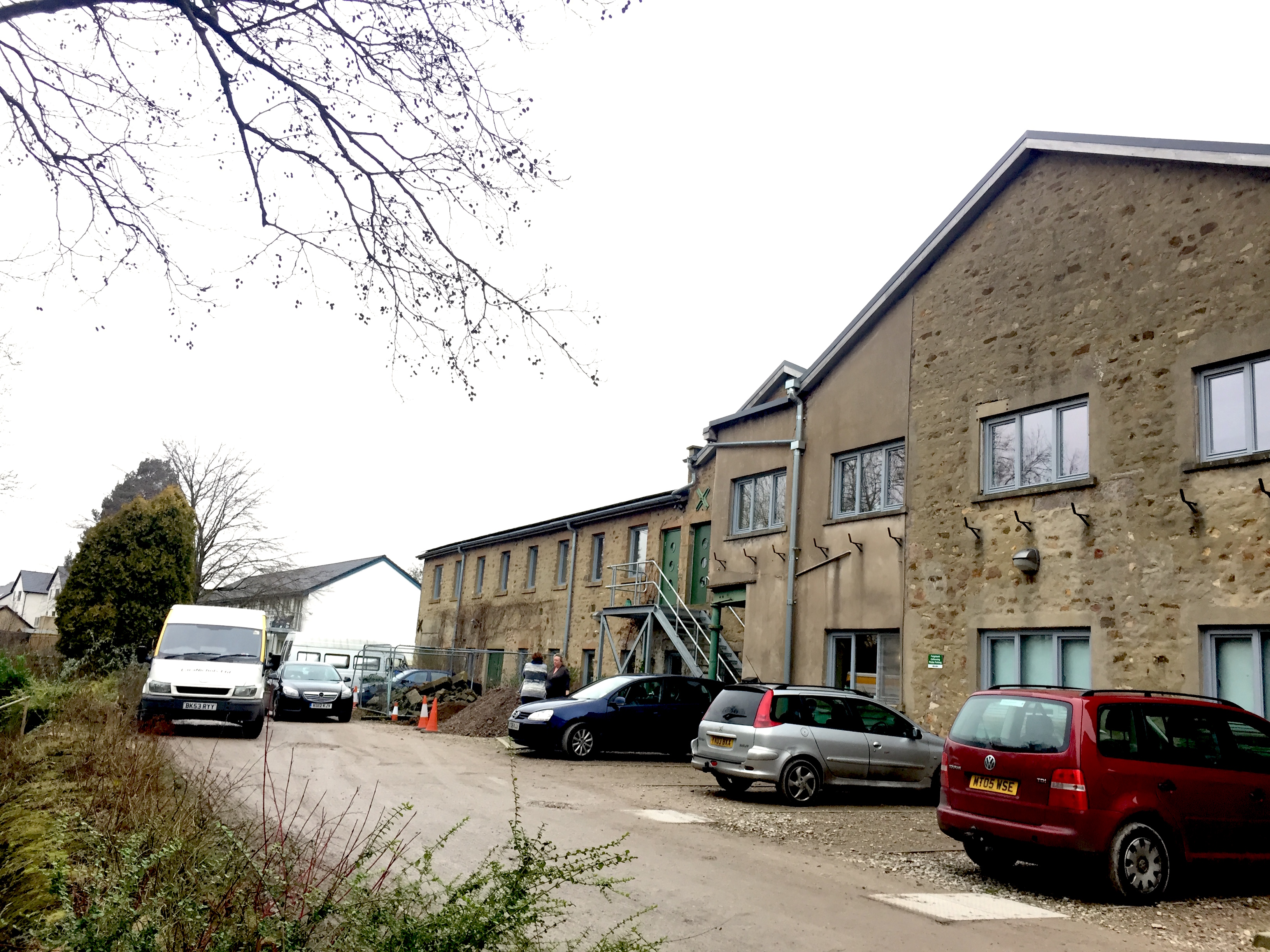 The development benefits from a heating network supplied by a biomass boiler and solar thermal array. There is also an adjacent 150kW hydro electric power plant on the River Lune and a 90kW solar PV panel installation which are also managed and run as co-operative enterprises.

The whole development is suppied by a private micro-grid connected to the wider electricity grid via its own sub-station and as such provides an excellent test bed for Nobel Grid. The co-operative tenants are interested in maximising the use of generated electricity on site and avoiding peak demand charges in order to maximise income from their renewable assets but are also keen to investigate the supply of excess clean renewable energy to other local users connected on the local public electricity grid – including a school, housing estate, and light industrial buildings. 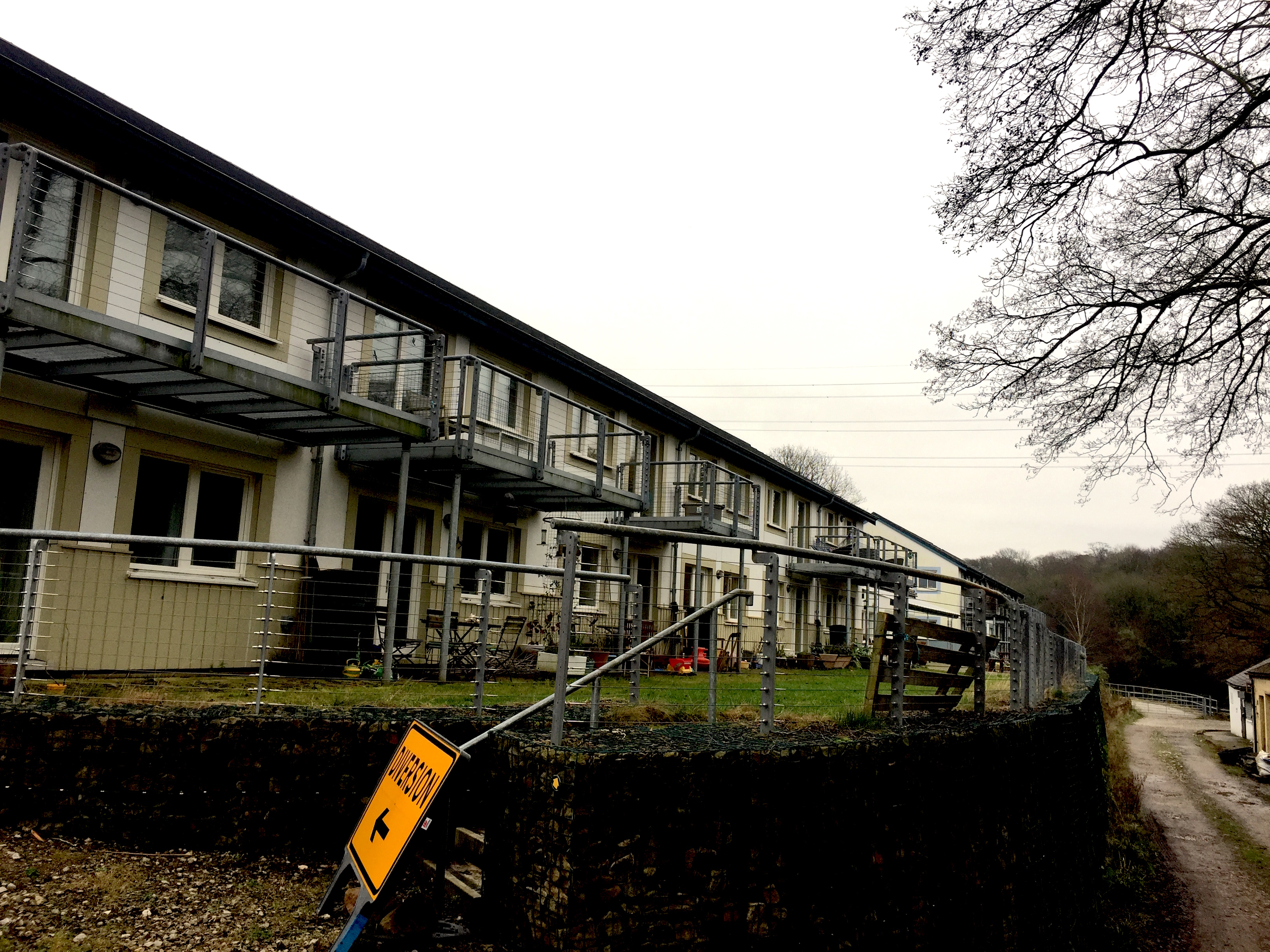 Carbon Co-op have teamed up with Lancaster Cohousing co-operative to test new hardware developed in Nobel Grid. The SMX devices have been assembled in Manchester by Carbon Co-op using open source Raspberry Pi technology and are designed to be fitted to already installed smart meters on site adding large amounts of smart network functionality and providing an AMR system for the use of tenants, hoseholders, and the local co-operatives.

Matt, technical lead, and Ben, electrical systems engineer, of Carbon Co-op are pictured here installing the SMX units to sub-meters, one for each business unit in the mill. The SMXs communicate with the Kamstrups via optical probes and then each SMX is connected via ethernet cable to a high speed internet hub, conveniently situated next to the sub-meters! 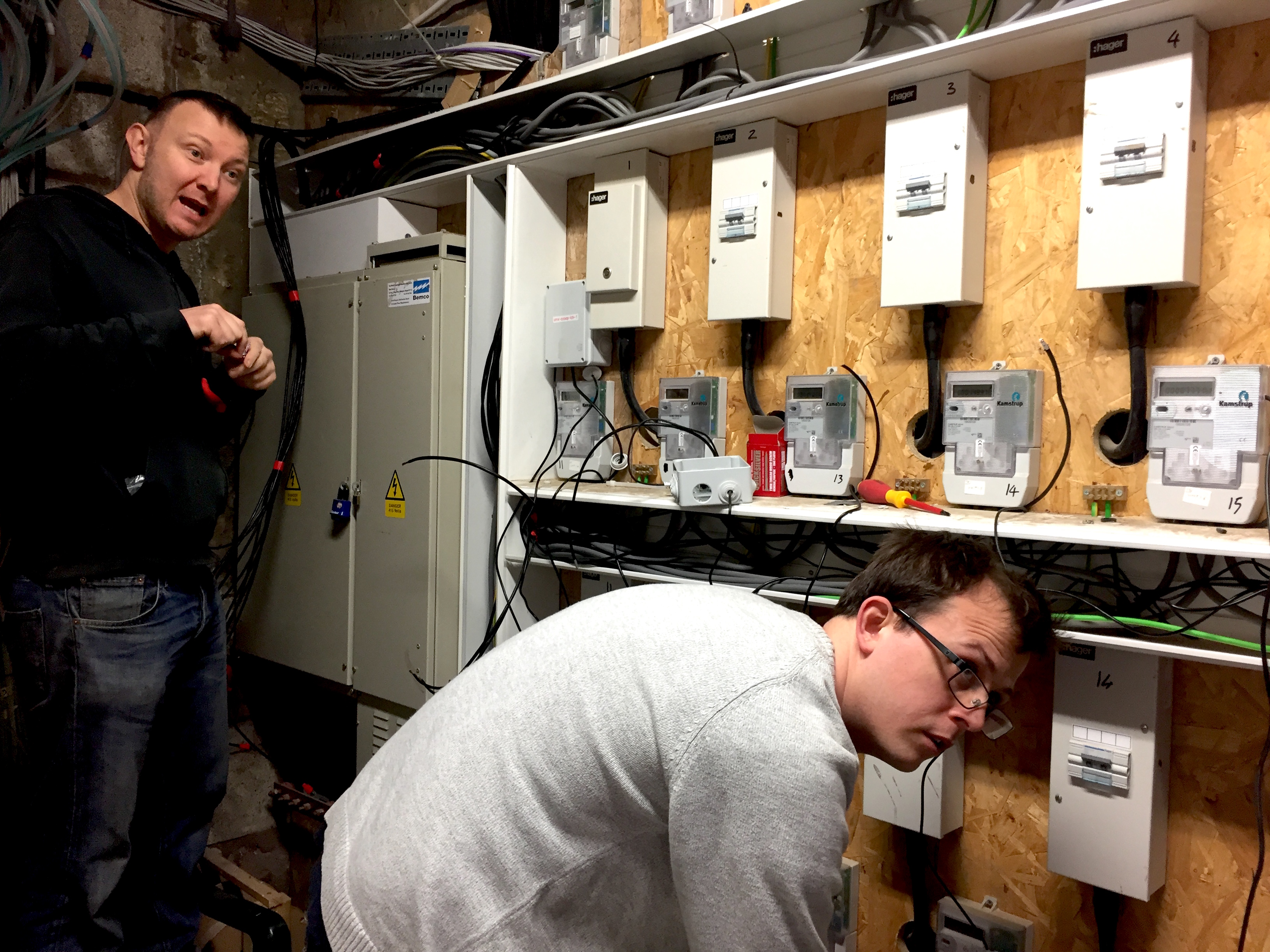 In the first instance, the SMXs will assist Lancaster Cohousing in billing the workspaces for the electricity they use. Until now that process has been done manually. Now, high quality real time usage and billing data can be sourced via the SMX devices .

In the later stages of the project, with the addition of the 60 domestic properties on the site, a manual demand response programme will be tested. In this case the householders, commercial tenants and the co-operative landlord will form a 'group' of users who will be informed when excess local power will be available from on-site generators or peak demand charges are in force, enabling them to maximise self-consumption and revenue.

Energy usage and solar and hydro generation production data will be collected via SMX and transferred to the Demand Response Frequency Monitoring (DRFM) Cockpit for analysis. The aim of the use case is to maximise self consumption applied across the entire site with the DRFM cockpit constructing a campaign of demand response events to achieve this. This is then fed back to individual users on an ongoing basis via a traffic light notification system available on web or smart phone. The more that householders can use energy when the light is green or avoid using electricity when it is red, the more the co-operative will save or generate money. 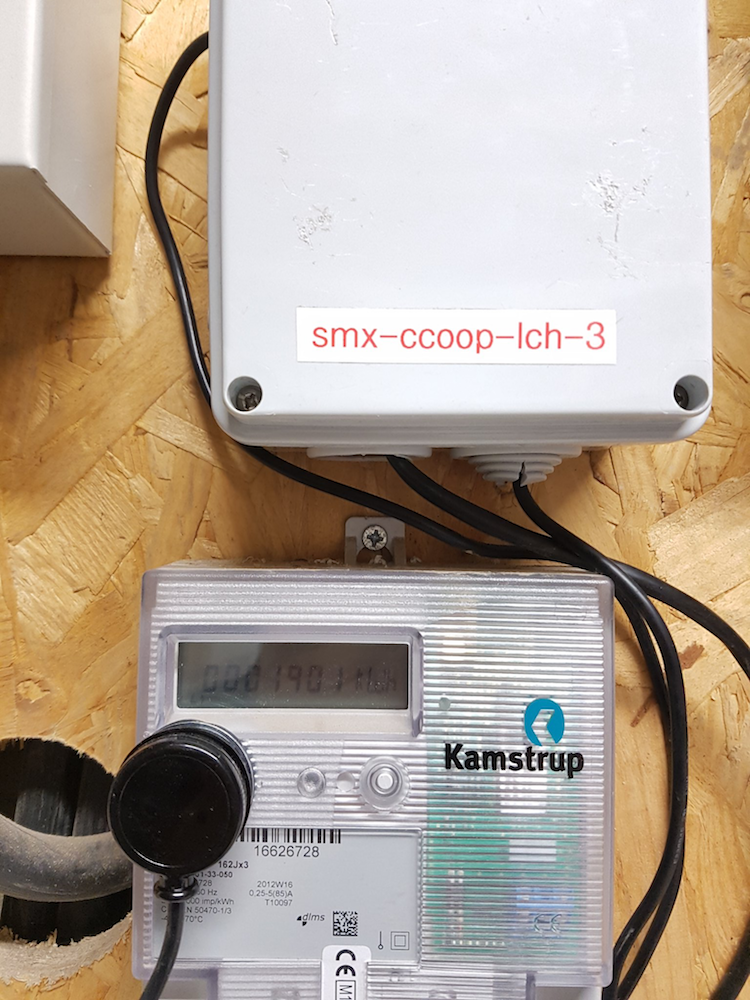 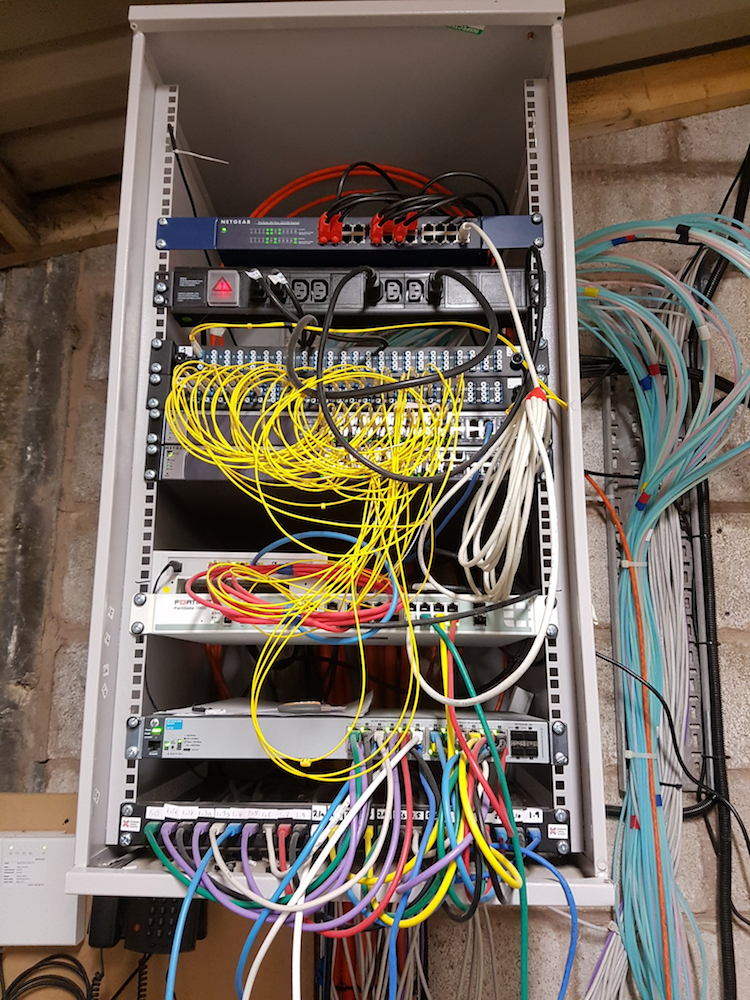 This process will be supported by Carbon Co-op, as well as installing and maintaining the SMXs, they will host householder and business engagement workshops, assisting people in understanding how the project and how the hardware works and working with them to devise strategies to maximise self consumption and evaluate, review and improve these at later stages.

As of January 2017, the SMX installation process is ongoing and will continue over the next few weeks. In February 2017, the mill will host the next Nobel Grid partners meeting with 40 people attending from around Europe and seeing the outputs of Nobel Grid installed and working up close!