The aim was to come up with a set of recommendations on housing retrofit to incorporate in to the Mayor’s Charter, to be launched at the Summit in March, but also to input more generally in to policy making on this topic at a Greater Manchester level in the medium to long term. There was also an acknowledgement that there are some things Andy Burnham and GMCA (Greater Manchester Combined Authority) can deliver and some things they can’t and a set of recommendations was also made to Carbon Co-op and other civil society groups and to national government. 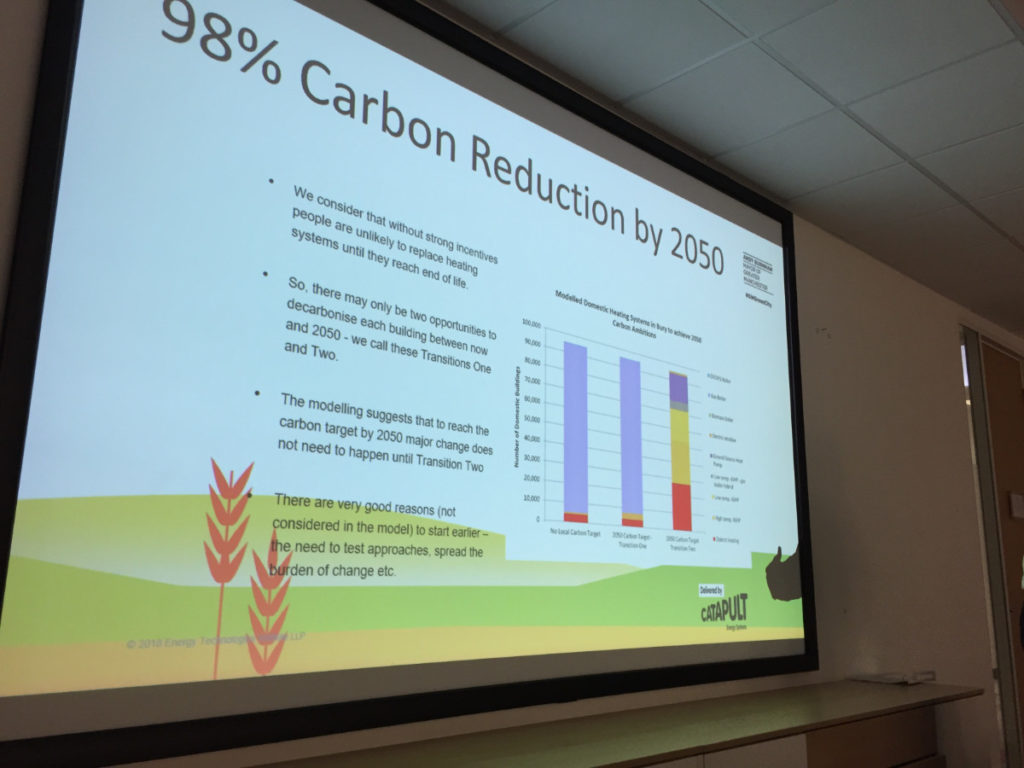 The event was structured with a couple of brief presentations followed by over an hour of facilitated small group discussions on specific themes (encouraging demand, supply chain finance and ambition and standards), split in to two sessions, to enable the event to benefit from the expertise in the room, to maximise time for input, discussion and debate from participants and to allow people to cover a number of topics. There was then a feedback session and finally each participant said which action they felt was most important on the subject.

With an absence of government policy and action on energy efficiency since the implosion of the Green Deal there is clearly now a role for local authority action to kick start activity.

The first presentation was from Mark Atherton, lead officer at the Low Carbon Hub, putting domestic retrofit in to the wider GM decarbonisation context. With ambitious carbon reductions needed soon, a programme of energy efficiency works is a key delivery channel for this. 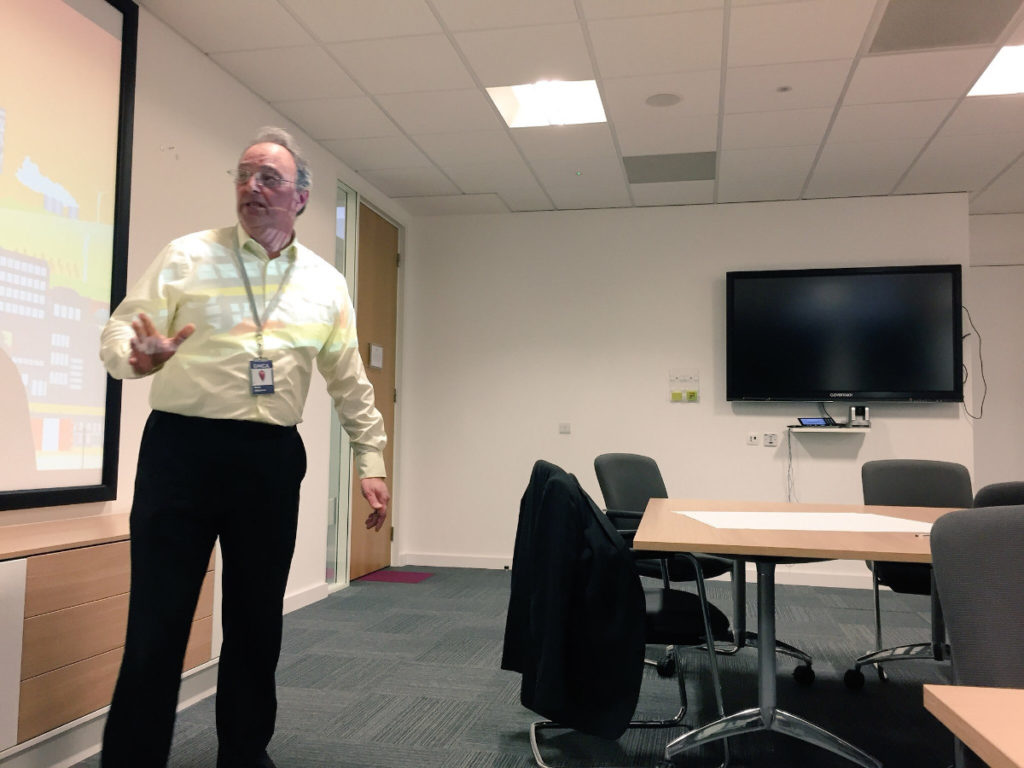 Marianne Heaslip, retrofit practitioner and architect at URBED outlined some of the opportunities and pitfalls within the retrofit sector, warning of the growing scandal around poor delivery of EWI works at a scheme in Preston. But she also outlined examples of deep, whole house retrofit delivered by Carbon Co-op that demonstrate the scale, quality and ambition of carbon saving possible from energy efficiency measures – if done properly. 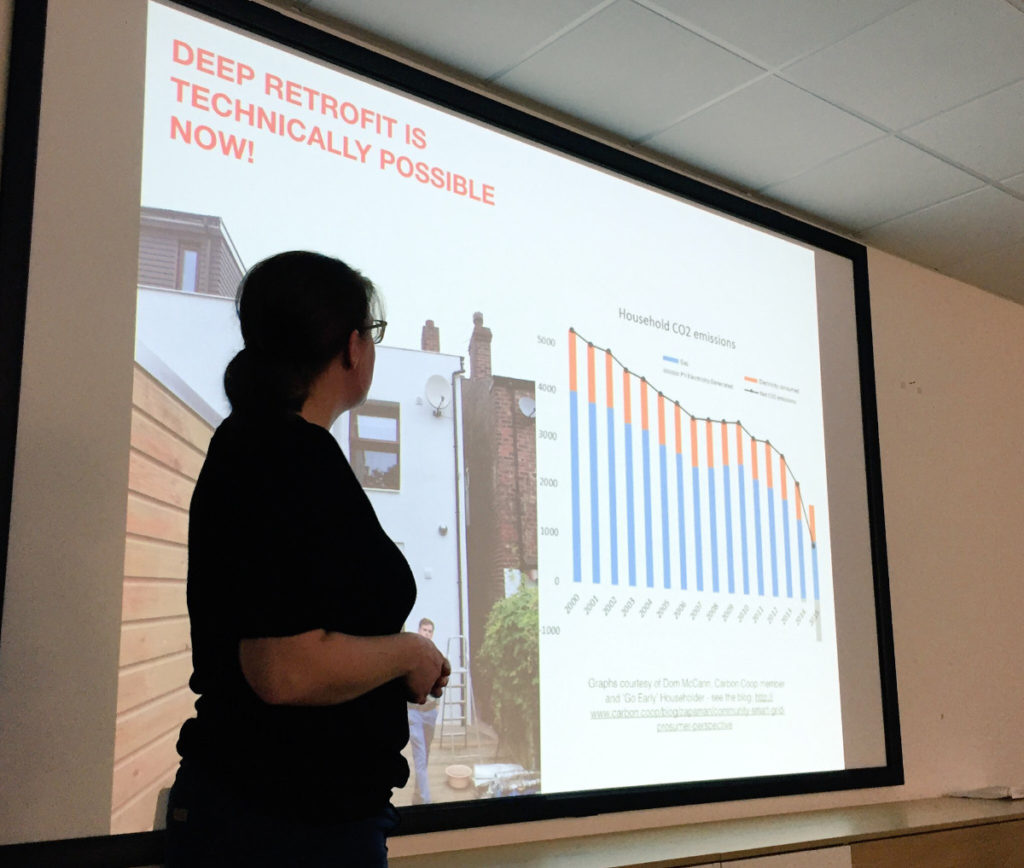 Summary of the key recommendations from the four themes

1. How can we build demand from householders, registered providers and private landlords in Greater Manchester for retrofit? Are there policies or regulations GMCA could introduce to help?

There was lots of discussion around educating householders and the need to simplify the terminology and jargon used in energy efficiency to make it more palatable and understandable to the average householder.

People felt it was important to dis-incentivise and penalise bad landlords and businesses that are failing to improve the energy efficiency of their properties and buildings and that a public campaign should highlight and stigmatise those that fail to act.

We know that it is far cheaper to take action to mitigate climate change now, rather than in the future and participants felt there was a need to financialise this gap in order to drive action now – something for government action.

Finally, they felt there was a need to make data on home energy performance publicly available eg in league tables of EPC ratings for landlords etc to drive action. 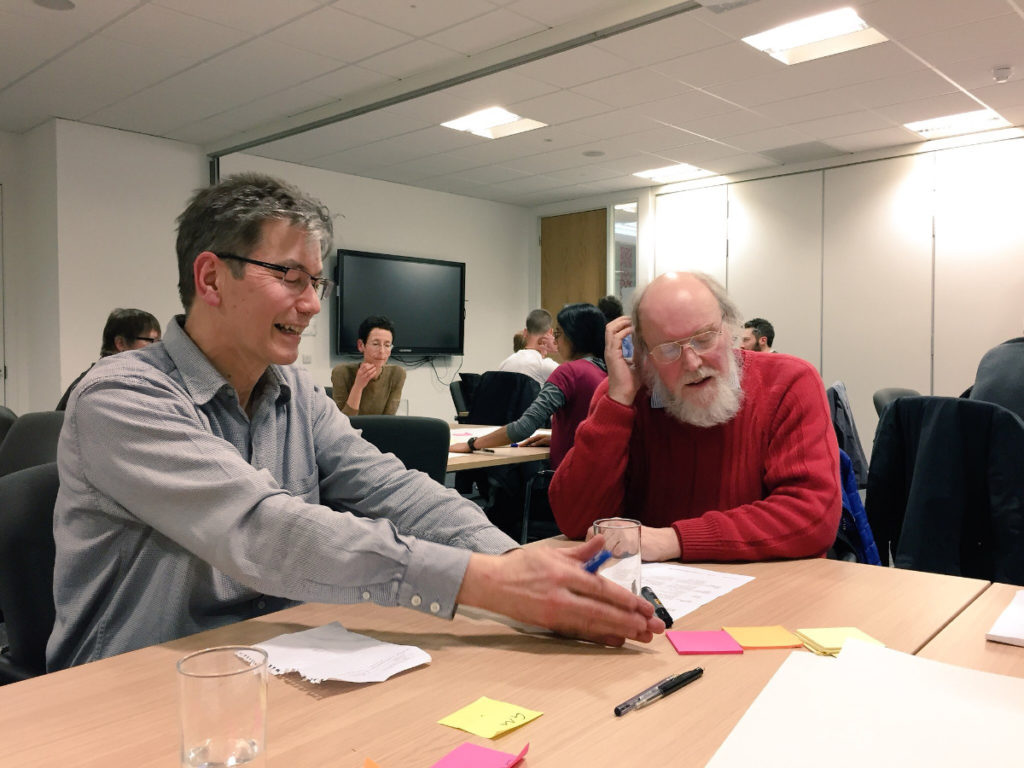 2. How can we assist in the development of a supply chain in Greater Manchester to deliver retrofit works? What role does GMCA have in growing the number of businesses here? What allowances do we need to make for training and educating a new workforce?

Participants felt we needed to set standards for supply chain businesses both within Greater Manchester and also UK-wide – mandating retrofitting to a ‘2050 building standard’ as soon as 2020. It was felt that higher national and local standards should be twinned with increased accountability for trades through enforcement at the local level.

They felt GMCA could co-ordinate a supplier rating system with legally mandated training standards. They felt a GMCA registration scheme for builders would build trust and could be possibly allied with an incentive scheme so that companies delivering quality works would be rewarded via grants, enabling lower consumer costs and encouraging demand

They felt there was an opportunity for a publicly owned, direct works retrofit company to support new skills development and work with universities in developing innovative new approaches.

At the Government level they felt there was a need for training and for a review of building regs in order to encourage retrofit and greater energy efficiency. 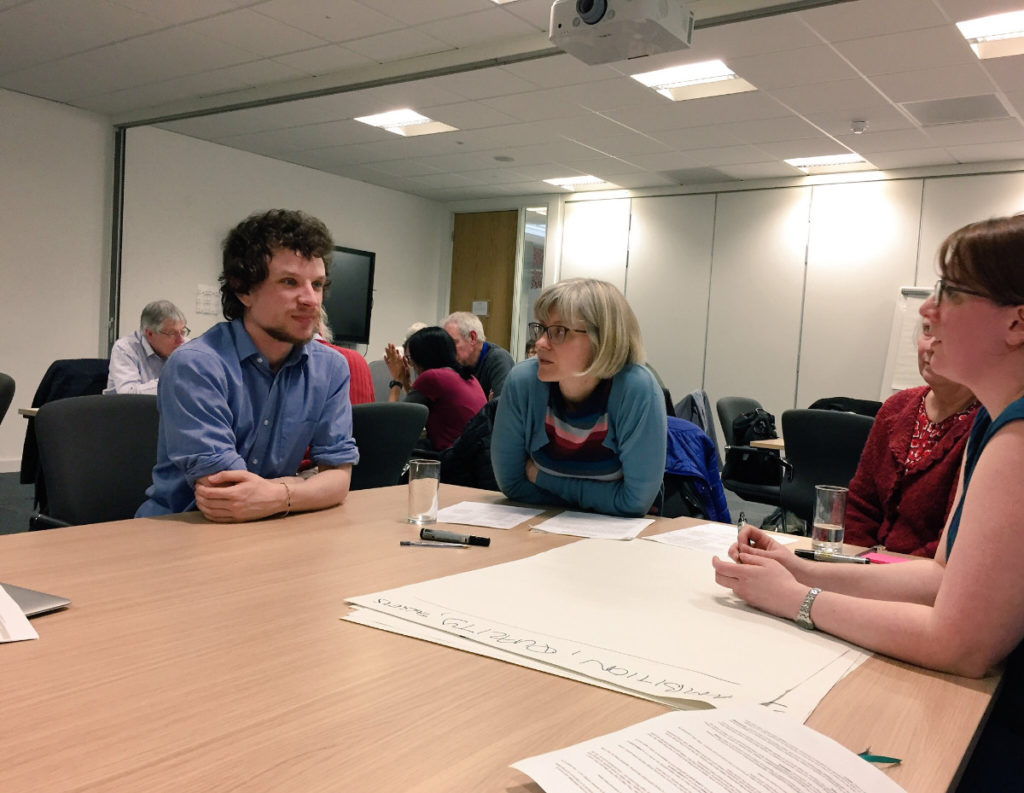 3. How can new finance options for domestic retrofit be created in Greater Manchester? What role does GMCA have in this? How can we mobilise the large amounts of capital needed to fund retrofit works across the city region?

Participants in this group sought to address access to affordable finance for retrofit and wanted to extend low cost interest loans for retrofit already available in some areas, to all areas of GM increasing the scale of the loans in order to cover the costs of retrofit. They wanted to band these loans so that lower interest rates were available to those making deeper cuts to their energy use.

There was an interest in local authorities investing money in to council-owned properties in order to scale and grow the sector and that there should be a commitment to ring fencing a portion of the Greater Manchester pension funds for retrofit.

There was discussion around incentivising landlords to take action where bills are not included in rent and the need to ask government to extend the weak legislation around minimum EPC levels required to rent a property.

On Energy Company Obligation funding, they felt DNOs were more appropriate delivery vehicles for ECO funding and that this could be matched with municipal finance funding. 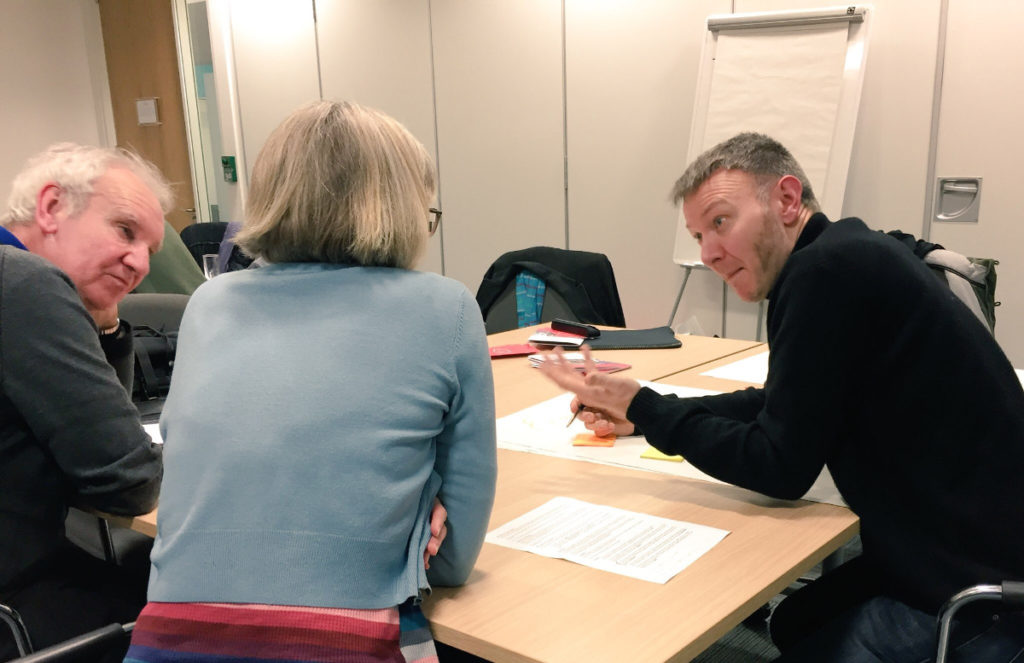 Participants felt there was a need for a Greater Manchester retrofit standard to raise the level of ambition and quality, possibly linked to or informed by existing ones developed by Centre for Alternative Technology or the AECB Carbon Lite Retrofit, with an understanding that such standards should not just be limited to energy efficiency but also health, comfort, equality and other social factors. The point was made that the certainty provided by a standard would help with the development of a quality retrofit supply chain – perversely, part of the failure to get quality works is the failure to ask for quality works!

Building regs were again mentioned with the need for an upgrade of existing standards – with consequential improvements for house extensions, etc.

It was also noted that unlike many other EU countries, UK relies on modelled data for evaluating energy performance, something that has the potential to overlook performance gap and quality issues, and there was a suggestion that quality standards use real, monitored data.

They felt householders should be helped to understand what can be done in their homes and that the Home Information Pack (HIP) should be revived, a digital record of past and future potential works for the next home owner.

Whole area retrofit programmes utilising innovative methodologies and technologies with a link up with social landlords were felt to be an excellent delivery model.

Finally, there was a call for ‘Building physics’ training for contractors and builders, so that supply chain companies have a full understanding of the rationale and wider purpose of energy efficiency techniques, products and works as well as a better understanding of what can go wrong if these are not adhered to. 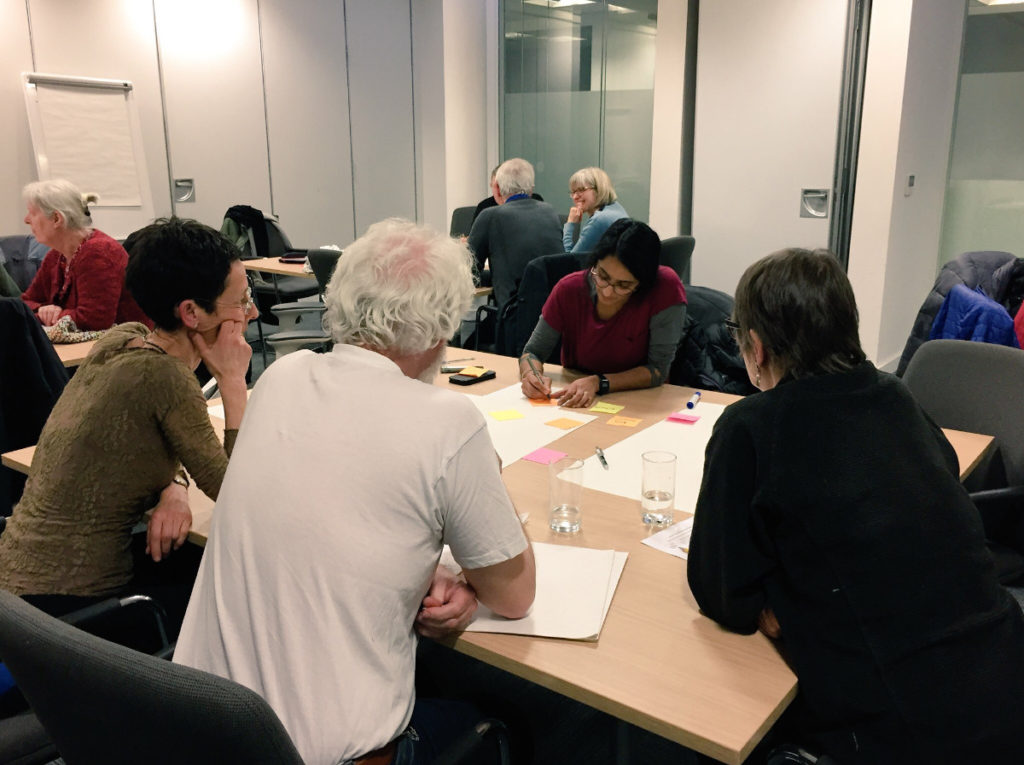 At the end each participant was asked for their personal take on the most important recommendation for housing retrofit in Greater Manchester?

Mark Atherton closed the meeting by thanking attendees for their attendance and reflecting that GMCA has a to consider in an area which is a significant opportunity but also a real challenge. Though not making a preference on a ‘most important action’ his thinking was that a number of actions could be combined in to a viable plan.

Carbon Co-op would like to say a big thank you to everyone who braved the weather and the trams and contributed to the evening! 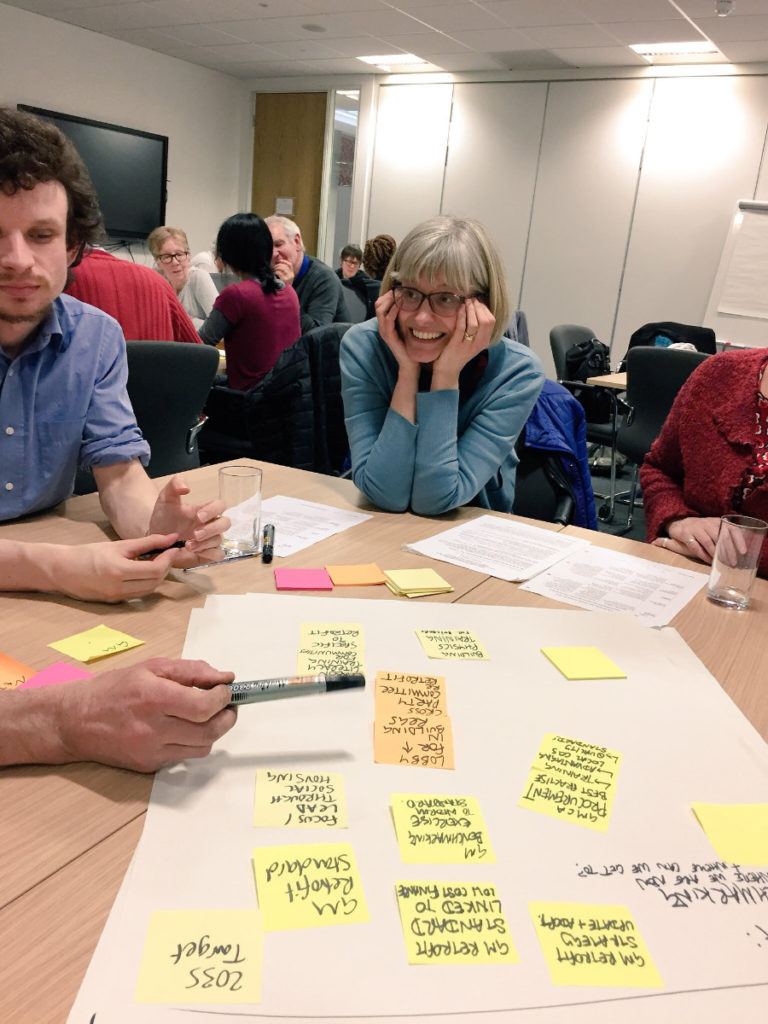