Beyond Paris – how can energy efficiency co-operatives contribute to achieving 2050 targets?

To paraphrase the great Douglas Adams, author of Hitchhikers Guide to the Galaxy, Climate Change is big. Really big. You just won't believe how vastly, hugely, mind-bogglingly big it is.

It's so big that new evidence suggests many of us don't even talk about it any more (http://www.climateconviction.org). Which may be something of a barrier if we are planning to avoid its worst excesses or even perhaps attempt to address its causes.

Over the years, we at Carbon Co-op have been talking about it and contemplating how people working together, co-operating in small groups around Greater Manchester might be able to do something to address the causes of climate change in the very place we are most able to take action: our homes.

We've gone a step further and done something about it! A whole house, energy efficient retrofit upgrade for 12 of our members' homes. Providing finance and technical expertise to fund improvements reducing their energy usage by an average 60% per property.

Was it all worth it?
Having done this and spent a great deal of time and energy, we are wondering whether the action we took is effective and proportionate in relation to the problem of climate change? Is it a drop in the ocean, a step in the right direction or actually a complete waste of time?

So we've invited some people who might actually know: a leading climate scientist and a leading retrofit expert, to give us their thoughts as part of our open annual general meeting, taking place from 6pm-8.30pm on Thursday 7th April 2016 at Bridge 5 Mill in Ancoats.

But we're going a step further and asking those who attend: our members, other co-operators, Councillors, policy wonks, do-ers, thinkers and the general public, to contribute their thoughts and ideas for further action. 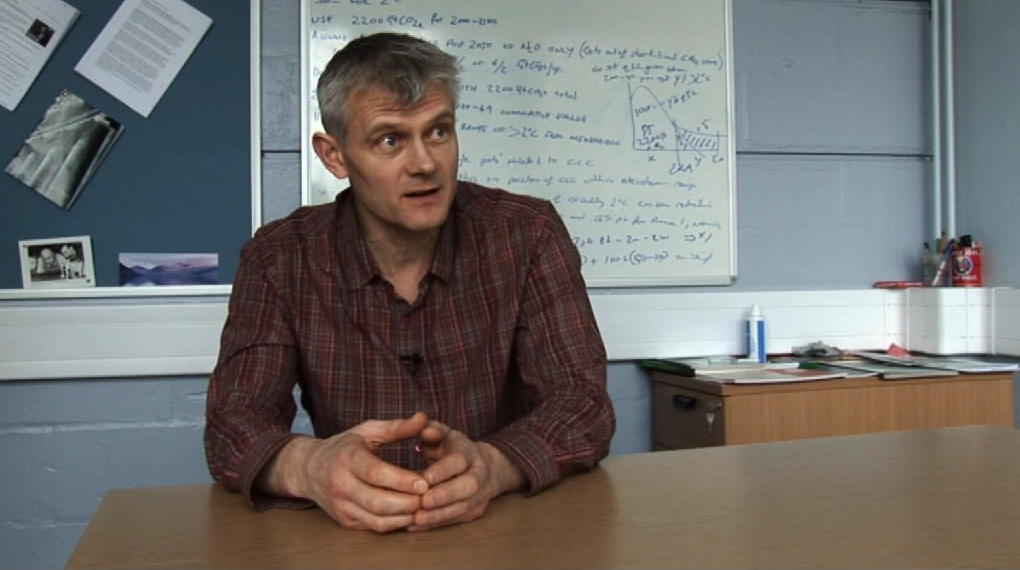 What would you do with £50m?
The starting point for our discussion in April, was an interview Marc Hudson of Manchester Climate Monthly carried out with Professor Kevin Anderson, one of the UK's leading climate scientists and co-director of Tyndall Centre, in the aftermath of last year's Paris climate talks.

The interview is long but well worth watching in full, pulling apart the guts of the international deal, what was said, what was not said and how we should feel and act as a consequence. Towards the end, Marc asks Kevin what he would do with £50m. After observing that in the scale of climate change (it's big, really big), £50m isn't actually that much money, Kevin suggests that he would retrofit a red brick terrace in Levenshulme and then tell everyone about it.

A Community Green Deal?
This got us at Carbon Co-op thinking because though we haven't retrofitted a single street we have retrofitted a dozen homes.

Community Green Deal was a project funded by central and local government to test elements of the now defunct Green Deal. But we put a spin on our programme, it was more ambitious in scope and scale than Green Deal and at its heart it was led by a co-operative, community-based approach.

Our technical partners URBED carried out in depth whole house assessments making a recommendation on measures and improvements that could be installed to bring the house up to '2050' low carbon standards. We secured zero interest loans for our members and ECO funding. We commissioned URBED to carry our architectural designs. We tendered the construction work and procured it on behalf of our householders. And we ran the construction contract with more assistance from URBED.

A waste of time?
It was a hard project and a long project. Work took place during 2014 and it was incredibly disruptive for each householder – having their homes ripped apart and put back together with a workforce not always sympathetic to their needs.

But after a clear 12 months since works were completed the results look very promising. Average carbon savings across the programme are 60% – as high as 92% in one case – the kind of targets we need to meet for 2050. Net bills (accounting for feed in tariff on the solar panels) have been reduced by an average £800 per year and average post-works net bills stand at just £325 per household, per year.

In the end we think it was worth it. And when we asked our householders they all said that though it had been hard they were glad they did it.

And, in the end we've outlived the government's Green Deal programme.

What will happen on 7th April?
As a community benefit society we are accountable to our membership (100 householders aiming to make similar large scale savings) and to the wider community in Manchester and beyond. We think what we have done is worth sharing but that we all have much more to do.

On 7th April we will meet on the top floor of Bridge 5 Mill in Ancoats.
Firstly for some food and to get to know each other better.

Then we we will get Kevin Anderson's view on the talks in Paris and to what extent a project like ours might have bearing on the work the UK needs to do to make its 2050 targets. We will reflect on the work we've carried out and Marianne Heaslip, a leading retrofit expert and architect from URBED, will talk about the nuts and bolts of the Community Green Deal project and some of the challenges that exist to repeating and scaling this approach.

Then we will ask your view. What do we need to do in Greater Manchester to make our homes warmer, healthier and more affordable to run. Who needs to be involved? What are the key barriers we face and how can we overcome them?

We will take note, write it all down and get on with the simply huge task of addressing climate change.

If you would like to join us you can book your space, free of charge here:
https://carbon-coop-agm-2016.eventbrite.co.uk