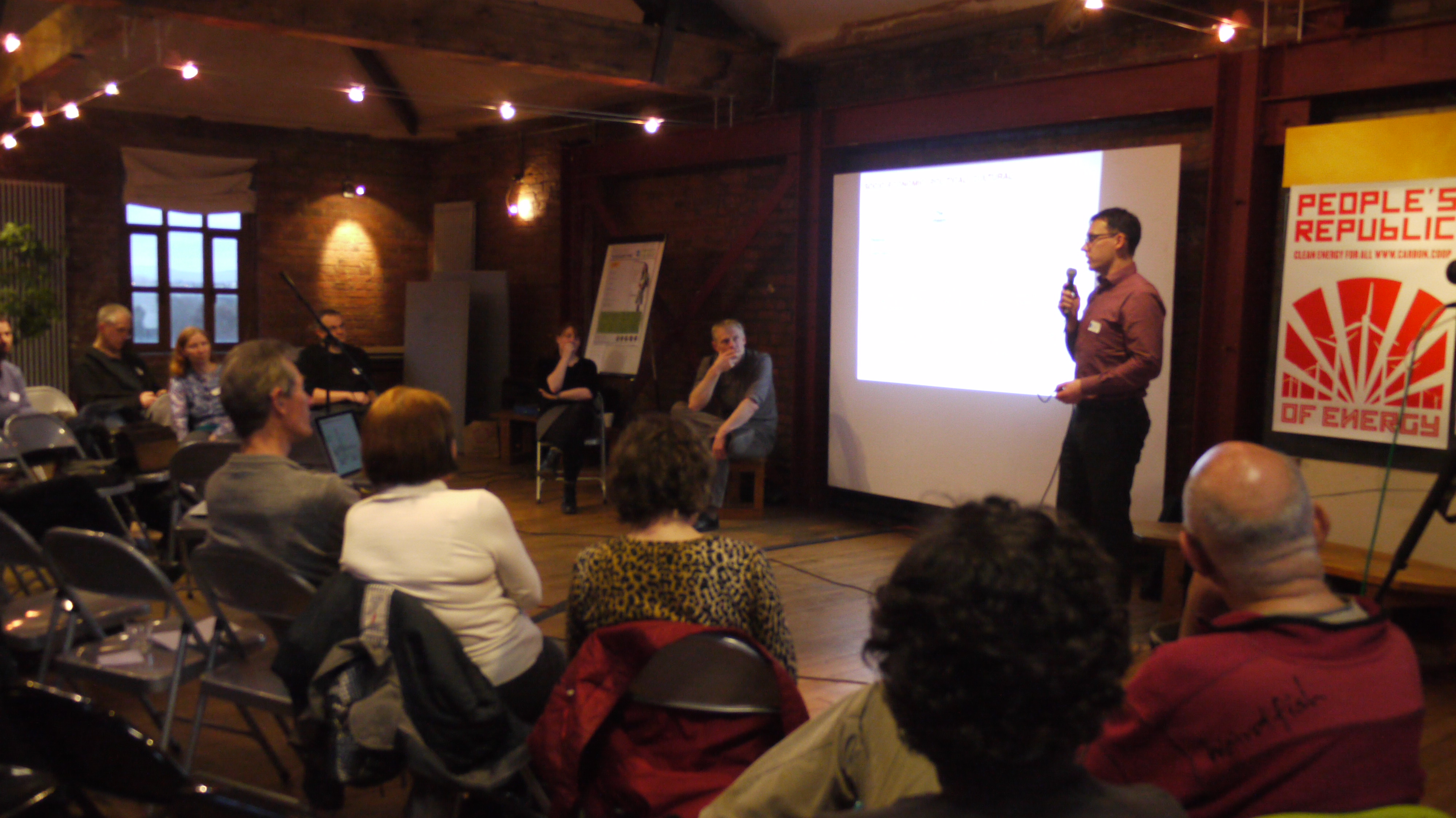 This year's AGM event, which took place on 7th April 2016 at Bridge 5 Mill, featured an illuminating set of presentations outlining the role of Carbon Co-op's energy efficient retrofit projects in the context of increasingly challenging global climate change targets with the Q&A discussion featuring debate on the role community energy organisations like us can play in catalysing wider societal action.

Professor Kevin Anderson of Tyndall Centre began, contextualising the UN climate agreement made in Paris last year and outlining the task ahead for the UK and other countries in achieving what might be considered 'safe' levels of global warming. In summary, he felt we have an outside bet of meeting a 2 degree temperature increase! 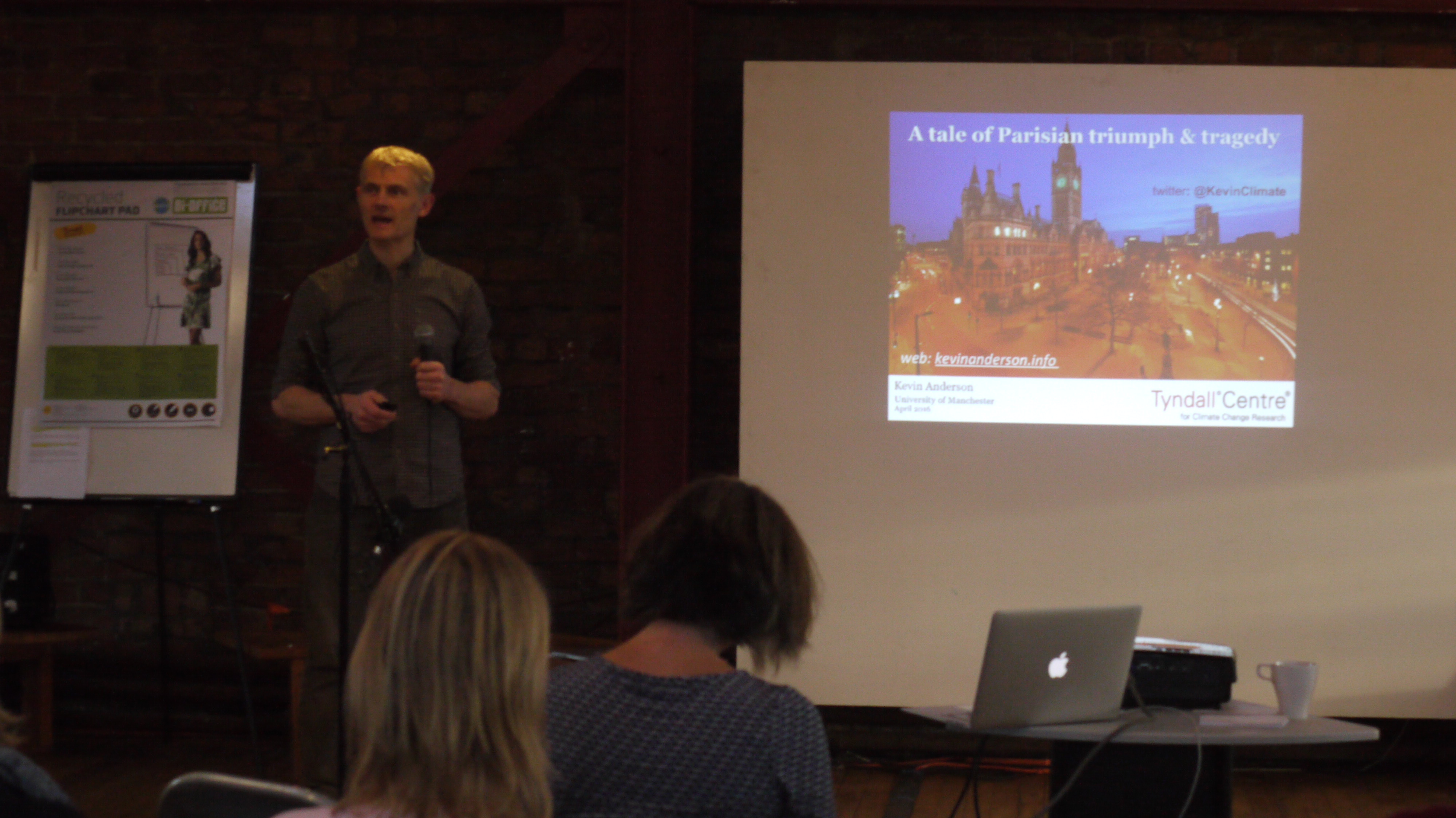 Though a daunting prospect, Kevin highlighted the role Carbon Co-op's members might play in providing concrete examples of the large scale, achievable and replicable energy efficient retrofits which deliver significant carbon savings commensurable with the 2050 targets. In his opinion, case studies such as these can initiate quick and effective changes in policy at a government level and references to Carbon Co-op retrofits in recent presentations he has made to high level politicians and civil servants have already brought up questions on how the programme can be replicated elsewhere. 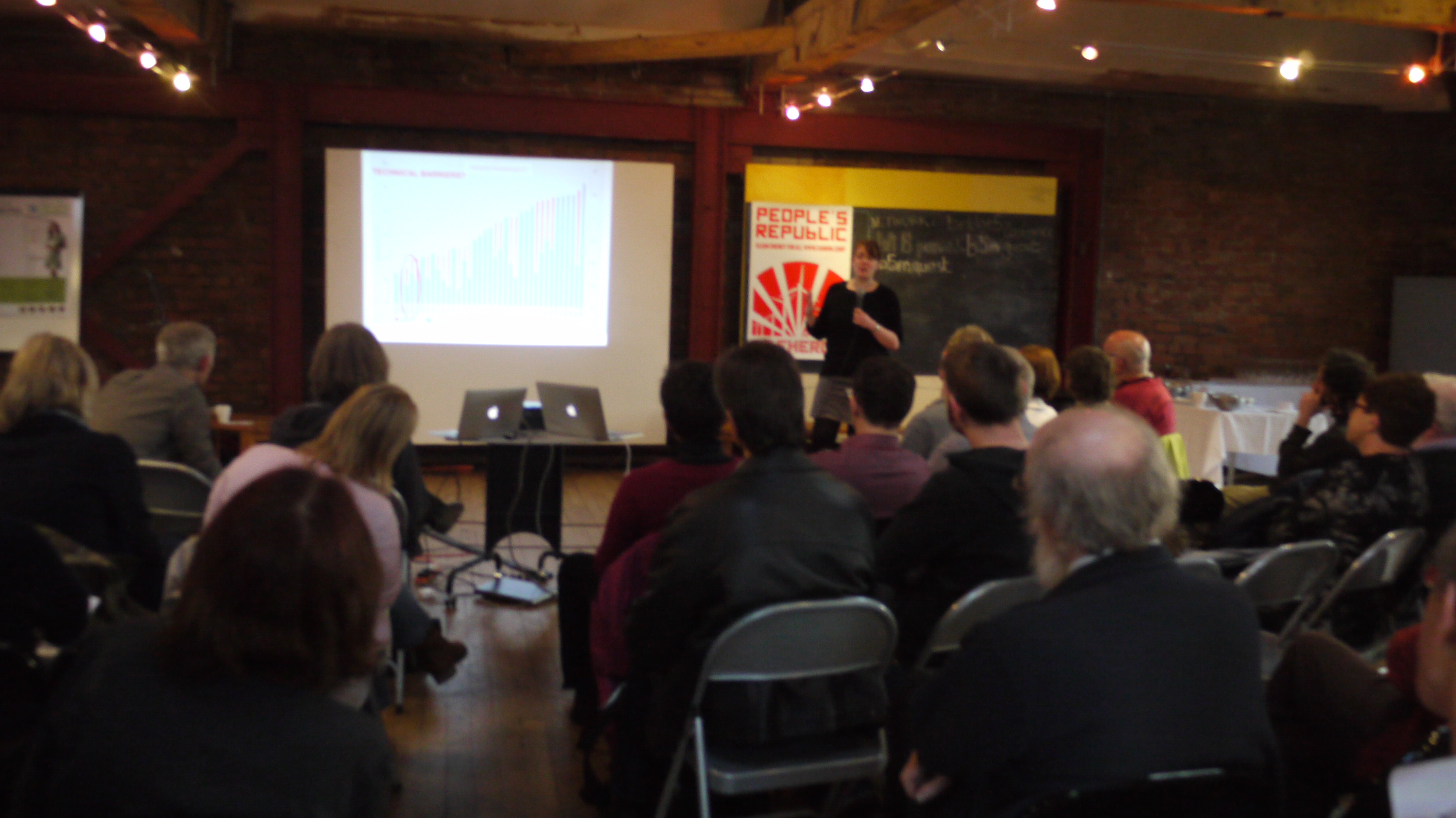 Marianne Heaslip of URBED, lead architect on Carbon Co-op's Community Green Deal programme, presented on the potential for the wider role out of whole house, low carbon retrofit in the UK. Though technical challenges were highlighted, she argued these were relatively solvable and that the real barriers were social, political and economic. For example, home owners have no problem investing tens of thousands on a loft conversion but simultaneously expect energy efficiency improvements to be free of charge. 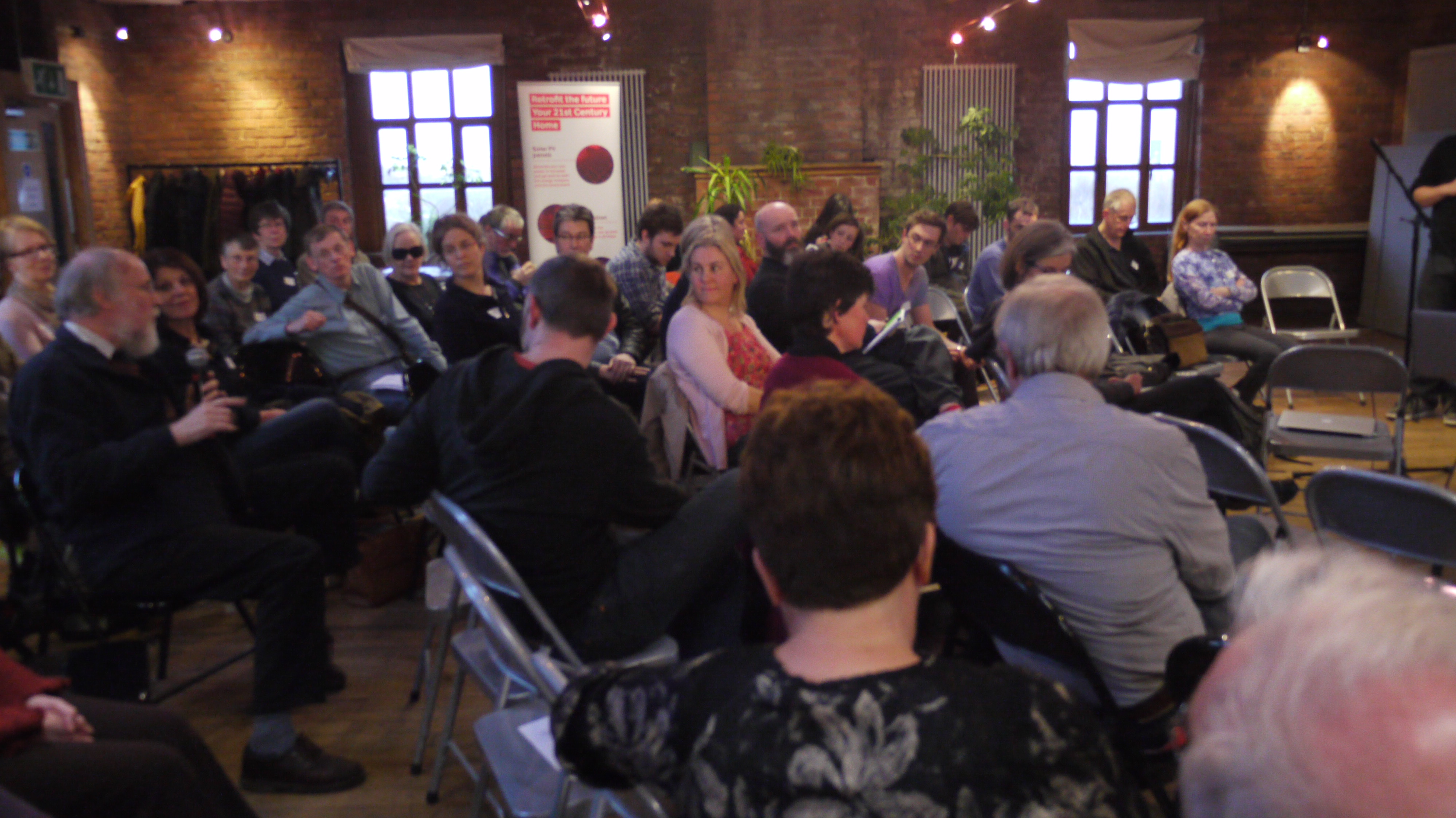 Marianne also highlighted the role of early adopters such as those within the Carbon Co-op's membership, and the challenge of bridging the metaphorical 'chasm' to the wider majority.

For the subsequent Q&A session the presenters were joined by Rob Jones, a Carbon Co-op committee member. The discussion was wide ranging and touched on a number of themes including the role of small numbers of pioneers in influencing government and the wider population, the sometimes confused association between carbon reduction and fuel poverty alleviation (many in fuel poverty probably need to emit more carbon!) and the relative merits (or otherwise) of biomass in general and wood burning stoves in particular. 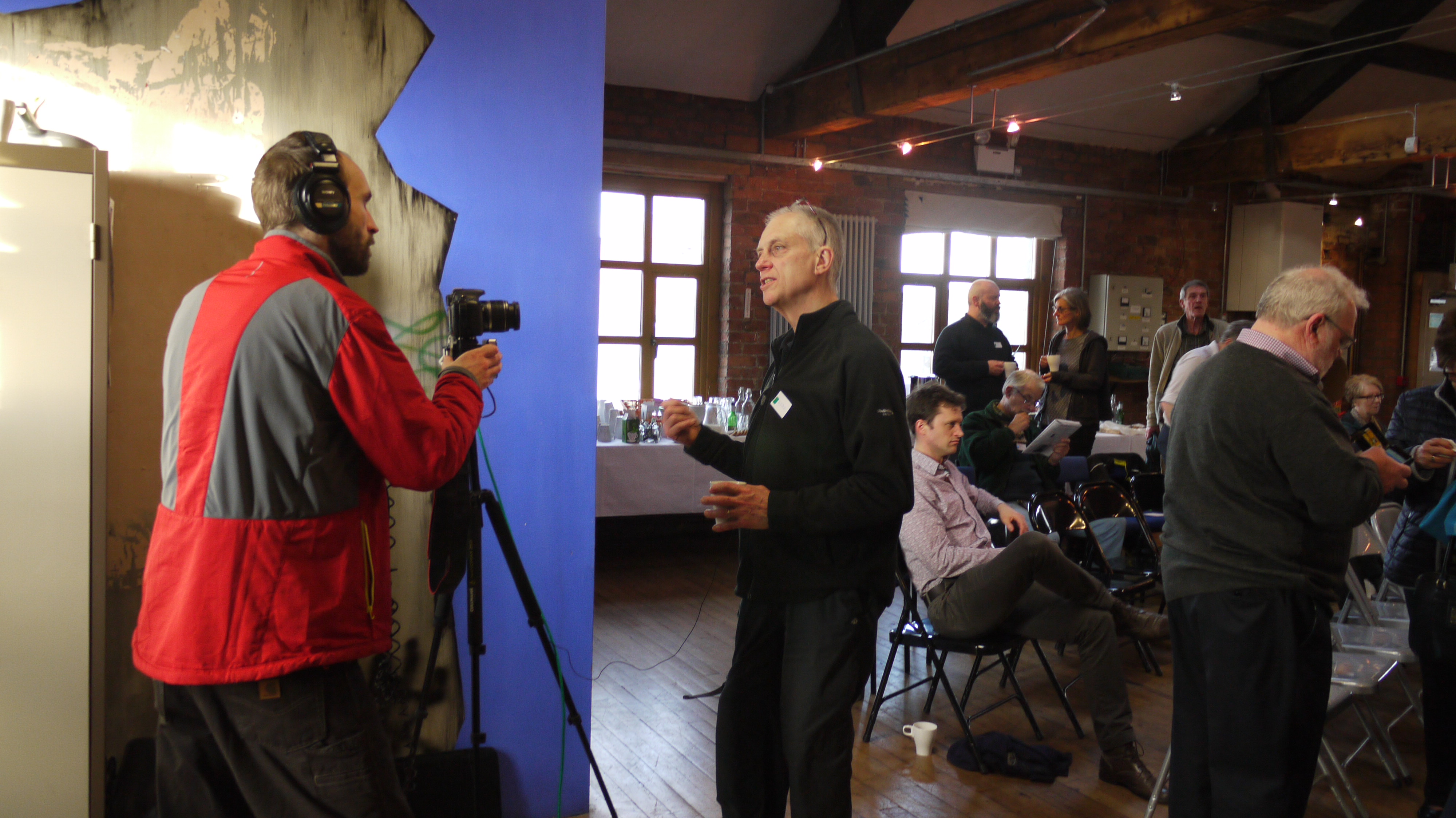 The evening finished with a discussion on the responsibility a very small number of wealthy Westerners (Leonardo Di Caprio for example!) ultimately bear for a significant share of carbon emissions (the richest 1% emitting many thousands of times more than the poorest 1%), with the ultimate conclusion that we need to communicate with other people in our communities and peer groups to spread the carbon-saving message in ways relevant to them (rather than seek out meetings with film stars).

A set of online videos documenting the presentations and the discussion will be available in the next month.

Photos from the event can be viewed here.